Noir City XVI #6: My Mind's Playing Tricks On Me 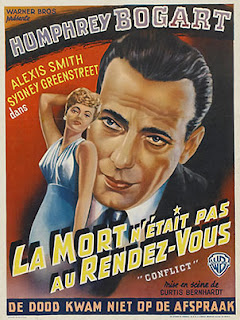 On Sunday, before our date with Jealousy's Dr. Monica, we denizens of Noir City were plunged into the bizarro world! Up was down, left was right and Sydney Greenstreet was good while Humphrey Bogart was bad! Of course, Bogie's been the heavy before--his work in the 1930's was primarily in this vein--but after Casablanca, audiences probably didn't expect their romantic ideal to revert to being a heel. But here's Bogie as a wife-killer in love with his much younger sister-in-law in Conflict, a movie Jack Warner demanded Bogart make because Warner hated Bogie's newfound status as a romantic leading man.

Though made 2 years earlier, Conflict wound up on the 1945 roster of releases. In addition to presenting Bogie as a real heel named Richard Mason (whom he plays with committed enthusiasm), Conflict also casts Sydney Greenstreet as the film's hero, criminal psychologist Dr. Mark Hamilton. Dr. Hamilton is first seen holding court amidst a group of believers and one skeptic (much like Thomas Mitchell did earlier in Flesh and Fantasy). Mason wears his disbelief on his sleeve as obviously as he wears his forbidden desire for Evelyn (Alexis Smith), the sister of his mean ol' wife Kathryn (Rose Hobart). These two emotions cross paths when Mason brutally bumps off Kathryn, then makes a critical mistake about his alibi that only Dr. Hamilton notices.

Conflict is very sly and very clever. Based on a story by the great Noir City staple Robert Siodmak, the film starts to play us--and Richard Mason--like a fiddle. You see, despite watching Richard dump Kathryn's lifeless body into her car then push it down a mountain canyon where it conveniently becomes buried in a massive pile of logs, we're led to believe that Kathryn is not dead. She keeps showing up, first in a letter written in her handwriting, then on the phone, and then in person, seemingly disappearing into thin air when she's pursued by her murderous husband. This drives Mr. Mason bonkers, and even worse, throws a King Kong-sized monkey wrench into his plans to woo a vulnerable Evelyn.

Is Kathryn really still alive? You'll have to see Conflict to find out. The solution is well worth your time. And you may even reflect afterwards, as I did, on whether the roles truly are reversed for Greenstreet and Bogart. One could make a credible argument here in Noir City that Greenstreet's still the villain, albeit in a very, very dark way. 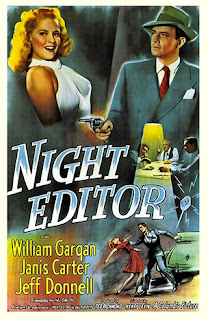 No such ambiguities about villainy are present when evaluating Janis Carter's Jill Merrill in 1946's randy radio play-turned-B-movie, Night Editor. Miss Thing is rotten to the core, an adulterous blonde who gets off on violence and can wrap dopey horndogs around her little finger with minimal effort. In other words, she's our kinda dame here in Noir City! She's the femme fatale in this surprisingly naughty tale based on the popular radio program created by Hal Burdick. Each tale is recounted by a newspaperman, a device the film easily adapts.

Jill's current squeeze is family man and police detective Tony Cochrane (William Gargan), whose home life is presented as the dullest episode of a bad 50's sitcom. He barely touches his wife and runs from his house like a Hanna-Barbera cartoon character in order to rendezvous with Jill on a shady lover's lane. In the midst of a heated makeout session, Jill and Tony witness a brutal murder: a woman is beaten to death with a tire iron right before their very eyes. When Cochrane turns on his headlights, he gets a good look at the killer. But Jill talks him out of pursuit--after all, how will he explain to his wife what he was doing on lover's lane?

Jill gets all hot and bothered by the murder, but Tony's conscience starts to gnaw at him. The gnawing becomes a full-on shredding when Tony discovers the murderer hiding in plain sight at the victim's bank. It's here where Night Editor really gets interesting. Cochrane puts in his due diligence to create a case against the killer, but the guy is not only not phased by it, he provides a really tight alibi. AND he runs off with Jill, leaving Tony to stew in his own guilty conscience and overheating loins.

To say more would be criminal, but I would like to point out one thing: Look at this picture and tell me what movie this reminds you of: 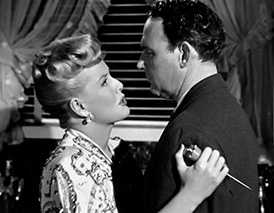 We see you, Sharon Stone, and we know where your most famous movie got its ideas! Like I said before, there's nothing new under the sun. (How did the censor not see this in 1946?!) 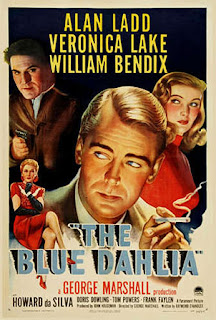 I gotta be honest: I'm not as high on The Blue Dahlia as perhaps I should be. I mean, it's fine, well-acted (especially by William Bendix) and any pairing of Alan Ladd and Veronica Lake is always welcome. But this thing takes its sweet old time twisting itself into pretzel after pretzel before ending with a solution that feels as if someone spun a wheel with all the characters' names on it and picked whomever it landed on as the film's killer. Regardless, one could do far, far worse than this movie, wich was written under intense pressure and in a boozy haze by literary legend Raymond Chandler.

Rushed into production by Paramount and producer John "We Earrrrrn it!" Houseman in order to use Ladd before his mandatory military service, The Blue Dahlia was a huge postwar hit. Ladd and Lake provided enough sexy heat to kickstart the wave of baby boomers. And Chandler got an Original Screenplay Oscar nomination for all his trouble. Getting lit off your rocker and writing a Noir is the best--and most respectable--way of getting the Academy's attention.

Next time: Teased by Michael Curtiz
Posted by odienator at 2:14 PM