Noir City XVI #5: You Don't Mess With the Monica 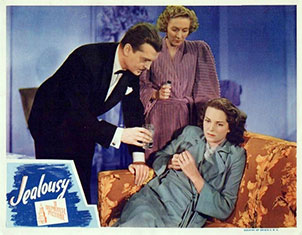 Lord Tennyson once waxed poetic about how "'tis better to have loved and lost than never to have loved at all." He might have written those words for Dr. Monica Anderson (a great Karen Morley). The good doctor nurses a major crush on her boss, Dr. David (John Loder), but she'd never show it. She acts like "one of the boys," and David sees her as such. When spunky lady cab driver Jane (Jane Randolph) mistakes as true romance the affectionate way David speaks to Monica on a phone call, he tells her that Monica's too sharp and too smart to hold any interest in him. Just like far too many men here in Noir City, Dr. David is WRONG!

Czar of Noir Eddie Muller called Jealousy, the B-movie half of Sunday's 1945 double feature, the "closest thing to an art movie we're showing." An art movie Noir sounds like a shot of bourbon followed by a chaser of castor oil, but never fear! Jealousy is helmed by a visual sensualist named Gustav Machatý. Machatý was responsible for Hedy Lamarr's scandalous 1933 film, Ecstasy, wherein Ms. Lamarr swam nude and got bizzy onscreen. While he can't go anywhere near that film's level of eroticism in post-Code Hollywood, he can still sneak some heat into tamer images. Notice how he first reveals Dr. Monica's love for Dr. David. Caught in a swoon after he leaves, Monica leans headfirst into a mirror, bumping against her own image like a cat head-butting its affection into a beloved item.

Machatý fills Jealousy with tactile images like that, starting with the opening scene's taxicab locations superimposed over Jane while she narrates the film's introduction. This is really her story, a tale about a woman whose exiled Czech writer husband Peter Urban (Nils Asther) misses his home country so much that his depression renders him useless. Peter crawls into a bottle of booze every night and lashes out at Jane for supporting him with her cabbie work. It's no wonder Jane seems comfort in the arms of Dr. David. Her Brahms-inspired Meet Cute leads to a whirlwind romance that has an unforeseen obstacle: Doctor Monica!

At first, we think the Jealousy of the title refers to Peter. He knows about Jane and David, going so far as to threaten Jane if she tries to leave. But Peter's got stiff competition. Sure, Dr. Monica is friendly toward Jane, earning her confidence and being a kind, advice-giving girlfriend. And she's her usual supportive self where David is concerned, playing the supportive old chap role like she's the best male buddy ever poured into the female form. But the fear of losing the man she's secretly loved all these years also causes the heretofore wishy-washy Dr. Monica to grow a spine covered with spiky stegosaurus spikes. Jane and David were about to learn an important lesson: You don't mess with the Monica!

Many times in our beloved Noir, a woman uses her wiles to convince a fella to do her evil bidding. Not here! Monica does her own killin', and her plan to frame Jane for murder is so well thought out that she could easily get away with her crime. But fate is an equal opportunity demon here in Noir City, so one small detail becomes Monica's undoing. No matter! Monica goes out on her own terms, and Karen Morley's line about how killing--and killing again--is the ultimate way for a woman to show her love nearly brought down the house at the Castro Theater. As we often do when presented with something quintessentially noirish, the audience applauded lustily and rapturously. "Whoo! MONICA!!" someone yelled. Even the movie knew to end after that, leaving the fate of the accused Jane to the viewer's imagination. The things we do for love always lead to our downfall here in Noir City.

Next time: Bogie goes bonkers and Sharon Stone gets ideas.
Posted by odienator at 12:46 PM