by Odie Henderson
(Odienator is off today) 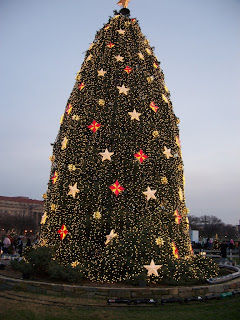 I wrote this as an E-mail to a few friends on Christmas Day, 2001. In the ten years since, it has never seen a public light of day, at least not to my knowledge, and I was perfectly fine with that. But when it came time for me to write something for the holiday season, I decided to run it with an explanation of why I did. That explanation used to be here.
This introduction was originally four paragraphs longer, but I decided to let the work speak for itself. I saved one line from that which has been excised: This is probably the sweetest thing I have written or ever will write.
You can find your friendly neighborhood Odienator causing holiday trouble on December 29th when I run my annual Odie-Tune the News year-end column at Big Media Vandalism. For now, Odienator's far more sentimental alter ego is here to wish you a happy holiday (Christmas, Hanukkah, Kwanzaa, etc.)
A Christmas Meditation
(written 12/25/2001)


This is my 32nd Christmas.

I do not remember them all. This Christmas is exit 29 on the slowly crumbling highway of my memory. Back at Exit 1, I found myself asking my mother how Santa Claus was going to visit, as we had no chimney. We did have a fire escape, and my quick thinking mother informed me that it would be a worthy substitute.  I never questioned how such a huge person could fit through our little kitchen window--after all, he could fit through an even smaller chimney. When faced with the prospect of reward, logic becomes irrelevant.

My mother put me to bed, and then set about waiting for Santa to knock on the kitchen window. She expected him 'round Midnight. "How many hours away is that?" she asked me. I thought a minute, and then replied "four hours from now." Ample time for me to get to sleep, for if I were awake, I'd get nothin' for Christmas.

Sleep found me easily. For some reason, I had not yet acquired the impatience of a childhood Christmas Eve, that fight for sleep which so eludes us in younger days as we await the treasure the morning would bring. If patience is a virtue, then this was my last virtuous Christmas Eve. 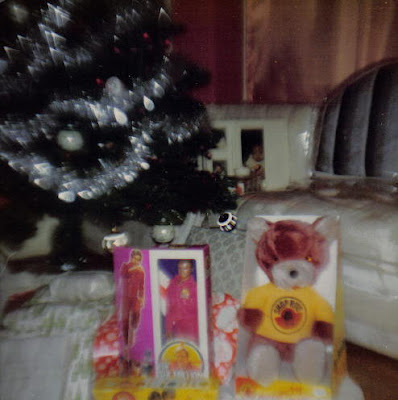 You can tell this was the 70's...
Amongst my numerous gifts that Christmas, trapped under the Six Million Dollar Man doll, the Instamatic camera that took the now defunct 126 Kodak film, and Scrunchy the Shop-Rite bear, I found the insomnia that would plague me for many Christmas Eves to come.

As the numbers on the exits of memory's highway got bigger, so did my family. I became heir to four siblings, each of whom would find their own Christmas Eve's insomnia buried beneath the gifts of the first Christmas they remember. My siblings became heir to the Christmas Eve traditions my parents first bestowed upon their eldest.

Every year, my parents would pile us into whatever American boat of a car they owned back then, and we'd go sightseeing in the ghetto. No matter how poor the denizens of our humble 'hood were, they always managed to create splendid displays of Christmas lights in their windows and outside their homes. It was as if the government gave out Christmas lights in addition to cheese and peanut butter.

Claremont Avenue was the place to be, as far as Christmas displays were concerned. Claremont Avenue was a one way hill that went from West to East. The show began once it crossed what was once called Jackson Avenue. When we passed the C-Town on the corner, the night was penetrated by an aurorae of blinking, colorful stars. Every house seemed to vie for First Prize in the Christmas pageant.

Being the oldest, I always had a window seat. As my Pops slowly drove down the block, behind cars doing the same, I pressed my face to the window. As my parents discussed the craftmanship and other boring adult details, I would ooh and aah along with my siblings and whomever else was lucky enough to fit in our family boat.

The spectacle only lasted two city blocks, but to us, it was like U.S. 1 from Maine to Key West. This was our Las Vegas, and we had hit the jackpot.

As I left the calm seas of childhood for the choppier waters of maturity, I lived vicariously through the sense of wonder in my siblings' eyes as they opened the presents Santa (and I, once I got a job) left for them. By then, I knew the truth about Santa--not that he didn't exist, mind you, for he did. He just wasn't that jolly old White man Clement Moore wrote about; he was that short Black lady in the corner, watching us open our presents. The one who gave us the ultimate gift.

Time drives on, and here we are at exit 29 on the highway of my memory. I am far older and wiser than I was at exit 1.  I am an insomniac for different reasons. My siblings are all adults as well, too, and they live vicariously through the wondering eyes of their children. I would have thought all my innocence lost, but September 11th reminded me that there was a lot more innocence to lose.

This year, I found myself longing for that more innocent time, a time when March of the Wooden Soldiers was broadcast every Christmas morning. A time when the Yule Log, a hideously boring four hours of footage of a burning log, played on Channel 11 every Christmas Eve. A time when I thought Santa did fire escapes as well as chimneys.  So...

...last night, I got into my car and took a drive down memory's highway. As I crossed Martin Luther King Drive, which was once known as Jackson Avenue, the sky lit up and my childhood returned.  Being the driver, I had more than one window seat. I drove slowly down the block, behind cars that were doing the same, and while I couldn't press my face to the window for fear of crashing, I still found myself oohing and aahing, as well as admiring the craftmanship and other boring adult details.

For that brief two blocks, I was a kid again, experiencing the wonders of Christmas that I had thought I'd lost.

I guess growing up poor in the 'hood gives you an appreciation for things others would find petty, cheap and garish.  But for me and those like me, who have left both childhood and the 'hood, but carry them both in our hearts forever, this was a return to my Las Vegas. And, if only for a fleeting moment, my innocence regained.

Merry Christmas everybody.
Posted by odienator at 6:46 PM 0 comments