Noir City XVII: #6: A Miracle Worker, a Broadway Baby and a Pin-Up Girl Walk Into a Noir... 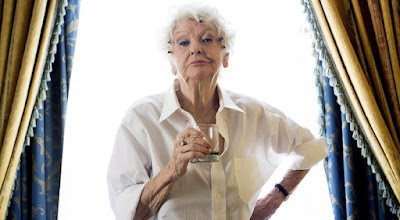 Elaine Stritch was a Broadway legend, an irascible force who lit up the Great White Way singing Sondheim and donning a personae that, quite frankly, would have been right at home in Noir City. Her signature song, The Ladies Who Lunch, is a self-aware, tough-dame anthem floating in a sea of booze and cynicism. And her take on Sondheim's I'm Still Here remains a masterful middle finger raised toward that which does not kill you. Noir was in this lady's nightly repetoire!

So I shouldn't have been surprised when Ms. Stritch turned up in Michael Curtiz's The Scarlet Hour. She's the sidekick of the adulterous Paulie Nevins (Carol Omhart), and though this is Stritch's cinematic debut, she's already commanding the spotlight. Her Phyllis Rycker is a slightly more gruff Eve Arden--there's more vodka in her verbal stingers--and Stritch is a delight here. "I wore a bathing suit in that," she told Alan K. Rode when he called to interview her for his essential Curtiz book Michael Curtiz: A Life in Film and boy, does she!

Phyllis is here to advise her pal Paulie, a gal who was in the right place at the wrong time. During an outdoor tryst with her lover Marsh (Tom Tryon), Paulie overhears plans for the robbery of a nearby mansion. The chatty criminals, who think they're alone in the woods, lay out the entire heist including its monetary worth, allowing for the lovers to pull it off themselves should that thought arise. Since this is a noir, that thought most definitely arises. Paulie needs that money to escape her rich husband James Gregory's clutches. Gregory is suspicious that his wife is being unfaithful, but he doesn't yet know that Paulie is keeping her affair close to home--Marsh is Gregory's right-hand man at work.

Though Paulie is the catalyst for downfall here, we don't feel any sympathy for Gregory. In fact, The Scarlet Hour pushes our sympathies toward Paulie by showing Gregory dispense a shockingly brutal beatdown to his wife after she returns home late. Curtiz pans the camera to their shadows on the ceiling, which makes the scene even more violent than if he'd shown the actors. Paulie's plans become even more desperate when Gregory later decides to take her away on a long trip "to save their marriage." He leaves the run of the company in Marsh's hands.

Marsh is unaware that the man he's cuckolding knows he's doing it. Gregory records a message to his secretary Kathy (Jody Lawrence) where he reveals that he's onto Marsh and that he's going to divorce the hell out of Paulie, leaving her broke. When Marsh hears this message, he deletes it, but it seals the deal for him to acquiesce to Paulie's wishes. He successfully pulls off robbing the guys who pulled the heist.

As usual, things go wrong, very wrong. Curtiz and his screenwriters Rip Van Ronkel (what a name!) and Frank Tashlin (yes, that Frank Tashlin) have lots of fun throwing out unexpected twists. For example, wait until you find out who orchestrated this robbery. And who else has heard that message Marsh thinks he deleted. And how it all plays out in the end.

The Scarlet Hour is an entertaining ride through the Tunnel of Noir, made all the more fun by Curtiz's little meta touches. When police lieutenant E.G. Marshall questions Marsh, Tryon reveals that Marsh  is short for "E.V. Marshall." There's also a scene in a record store where an album of Bing Crosby's White Christmas is used as product placement for Curtiz's 1954 movie version. You think you cute, Michael Curtiz, but we see you!

One other note: Curtiz's reputation as a star-maker sort of backfired when it came to Omhart (who is actually pretty good here) and Tryon. They didn't become huge movie stars, but Tryon did have a later career as a prominent screenwriter and novelist. He even adapted his novel The Other into a really warped horror movie helmed by the last person you'd associate with terror, Robert Mulligan. 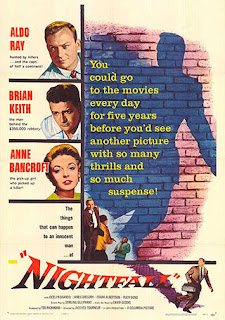 It's 1956 in Noir City, and Thursday night was David Goodis night. The acclaimed crime fiction writer was represented by two intriguing films, one of which Goodis scripted himself. The top of the double bill featured the inspiration for Brad Pitt's name in Inglorious Basterds and Mrs. Robinson herself, Anne Bancroft. The bottom half features a dangerous blonde whose husband was once played by Arnold Schwarzenegger in a TV movie!

Unlike Paulie in our prior feature, Aldo Ray's James Vanning is in the wrong place at the wrong time when he becomes embroiled in a heist plot. His fishing buddies turn out to be holding a bag full of stolen loot. That bag somehow explains the two crazed killers who are constantly tailing Vanning. Things get sticky when Vanning meets up with Bancroft's clothing "mannequin" Marie Gardner in a bar. Their Meet Cute involves half a sawbuck, snappy repartee and shots of whisky. It looks like Ms. Gardner may be trying to seduce James!

Unfortunately, Marie was merely bait to keep James occupied until his fishing buddies show up. They put a hurting on James, but he's adamant he has no idea where the money is. He suspects it's still in the fishing area, under a ton of snow. Ray emanates a weary vulnerability in this scene; like Thelma Ritter's pickpocket from a prior Noir City night, his tired resignation resonates with the viewer. But James escapes his captors, returning to the one place he can think of: Marie Gardner's apartment.

Marie believes James and offers to help him. This leads to Bancroft strutting her stuff at a lovely fashion show and a tense, snowy confrontation between hero and villains. And flashbacks, lots of flashbacks! This film is a Russian nesting doll of flashbacks. Screenwriter Stirling "In the Heat of the Night" Silliphant must have gotten paid by the flashback, because it gets ridiculous!

Thankfully, we've got the great Jacques Tourneur behind the camera to keep us focused on what really matters. Eddie Muller pointed out in his intro that Columbia demanded that Tourneur make the film's cinematography far lighter and less moody than his classic Out of the Past had, because TV couldn't register the darkness as well as a movie screen. The result is still visually arresting, with rich work by cin-togger Burnett Guffey. 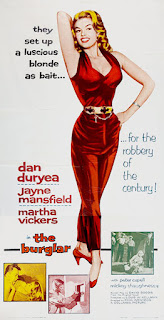 Jayne Mansfield's casting in The Burglar was a happy accident. Made two years before she became famous in films like the aforementioned Frank Tashlin's The Girl Can't Help It, this film sat on the shelves until Mansfield's star took off. Suddenly, Columbia remembered they had a movie scripted by a famous crime novelist from his own book and they rushed it out attached to a sexy poster. That poster proves that Columbia had problems with crude misrepresentations of their movies' intent long before Boyz N The Hood. The actress whom Ah-nuld repeatedly referred to as "Chayne" in The Jayne Mansfield Story is far from a bombshell in The Burglar. Her beauty and buxomness are present but subdued. 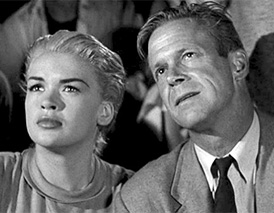 Mansfield plays an ace location caser working for the irreplaceable noir legend Dan Duryea. She's quite good too, holding her own against her more "serious actor" co-stars. Duryea provides a valuable assist, allowing his anguish over her character to feed their scenes. Mansfield responds appropriately with her character's romantic tension towards him. She's the daughter of the man who trained Duryea in the art of the heist (the narrated flashback to this event is given a literary feel by screenwriter Goodis), and Duryea sees her as someone to protect rather than romance. Martha Vickers on the other hand is more Duryea's speed.

With its casual diversions and its emphasis on character quirks, The Burglar plays like a novel unfolding before the reader's eyes. You can really feel this in the character played by Phoebe Mackay. Her Sister Sara is a celebrity, a rich woman who drapes herself in furs and diamonds yet talks about how charitable she is. Sister Sara is garish, even by noir standards, and she provides the film's MacGuffin in the guise of one of her necklaces. But this woman is unforgettably bonkers! No matter how dark the material gets, Sister Sara still hovers in a corner of the viewer's memory. That's hard to do when you have Duryea at the top of his game and Mansfield in a rare serious role. Sister Sara proves that we love all types of oddballs here in Noir City.

Next up: A festival post-mortem.

Posted by odienator at 3:29 PM 0 comments