A Tale Of OdieNary Mischief

In my old neighborhood, October 30th was known as Mischief Night. Halloween was for trick-or-treating; Mischief Night was for treating ourselves to trickery. Some of the kids I knew took to vandalizing property or cars. They’d bust windows or tires, sometimes even set small fires in garbage cans or toss cherry bombs in public mailboxes. There’s a story I once heard about my aunt taking some pictures with her Kodak 126 camera, then mailing the film to 15 Cents a Photo on Mischief Night. Someone threw a cherry bomb or some such device into the mailbox, and blew up most of the mail inside. The post office was able to read the return address on my aunt’s package, and sent her film back to her all burned up on November 1st.
My cousins and I weren’t that destructive. We kept most of our mischief to ourselves and their small circle of friends. We threw water balloons at each other (sometimes we’d drop them from the second floor of my aunt’s house) and sprayed each other with whipped or shaving cream. And years before Homey the Clown brought it to mainstream audiences, we beat the shit out of each other with socks filled with tennis balls or flour. Swinging them in the air, we’d unleash our fury on anyone we knew.
One of the neighborhood kids, a sadistic girl too big for her age, would fill her sock full of pennies. She was to be avoided at all costs. Her sock had skull-and-crossbones stitched on it, but it should have had a face with X’s for eyes on it, because a sock full of pennies will knock you stupid. Once, as she was chasing me, I zigged when I should have zagged, and her weapon of choice caught me. I saw that sock coming at me in slow motion, and when it connected, I saw visions of Abe Lincoln doing the Bojangles. She hit me so hard, my cornrows came loose.
The resulting Pete Puma knot on my forehead was so big I couldn’t wear my cheap, plastic Halloween mask the next day. You remember those: They had a rubber band stapled into them so they’d stay on your head (and pull out your hair). Ironically, I was Bugs Bunny that year, so the Pete Puma knot was a nice touch. Chuck Jones would have approved.
Lest I forget, we did something else that I’m not too proud of: We threw eggs. Not at each other, though occasionally that would happen. We threw them at cars and the Bergen Avenue bus. Now, I NEVER threw an egg at a car, for I feared I’d cause an accident or worse, the driver would immediately stop and tell my mother what I was doing. The bus was another story. I liked hitting the bus, and I rationalized why it was OK: The bus had a schedule and couldn’t pull over for more than a few seconds. That eliminated telling my mother. Kids in the ‘hood had been throwing eggs at the Bergen Avenue bus for generations, so they probably had special Mischief Night training for new drivers.
Mostly, I was good at it. For a kid who sucked at practically every other sports-related activity, this felt good. I could hit any part of the bus, from the Bergen Avenue sign in the front to the back lights at the top of the bus. I could time my throw so that the bus windshield would drive right into the flying egg. Granted, this is a BUS, a very large vehicle, but just go with me here. Let me have my joy. 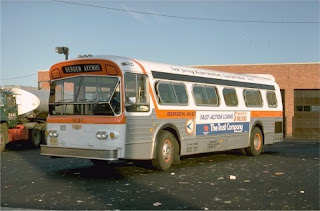 God help you if you were on the Bergen Avenue bus on Mischief Night…and your window was open. You were asking to get hit with an egg. There was always someone who didn’t get the memo and wound up with egg on their faces. One year, I was standing on the curb holding an egg and waiting for the bus when the brother of sadistic skull and crossbones sock girl stepped to me. “Hey man, gimme your egg,” he said. I was scared of him, so I handed it over. As the bus came, I saw there were several open windows. In one of them was a dark skinned, bespectacled Black man with an Afro. I saw him looking our direction as the bus passed. Sock girl’s brother threw the egg, catching the man right in the forehead. POW!
“Oh shit!” my cousin yelled.
“Did you see that?! Aw man, did you see that?” asked the egg-thrower, jumping up and down excitedly. Yup, we saw it. We also saw the victim running down the street, swinging something in the air as he ran. I thought it was a sock full of pennies, but as he got closer, I realized it was a belt. The man still had egg dripping down his face. Some of it was on his tie. Pieces of eggshell were stuck in his Afro. His glasses were gooey. It must have taken the angry man about 15 seconds to run from the bus stop on the corner to the middle of the block where we were. The perpetrator had his back to the action, so he never knew what hit him.
“You bastard!” the man yelled, grabbing the kid’s arm and swinging him around in the familiar dance of the ass beating. The belt made explosive sounds as it made contact with ass. WHAM! WHAM! WHAM! “Where is your mother?!” the guy yelled. “Take me to your house NOW!”
I don’t know how, or if, that kid got away—I ran in the house like a coward. But every time he talked shit after that, we’d remind him of that Mischief Night. “ya ‘member when that man jumped off the bus and beat yo’ ass for throwing that egg?” That usually shut him up.
Many years later, I got a taste of my own medicine. I was driving home from the supermarket when these kids egged my car. Unfortunately for them, they egged me as I was pulling into the parking spot near my house. I got out of my car, and discovered the kids were still there. One was laughing and pointing at me.
“Yo, man! You should only egg the cars that are not pulling into parking spots!” I scolded.
“Whatchu gonna do about it?”
There were three kids. Two looked about 12 or 13. The ringleader who addressed me looked about 15. I assumed he threw the egg, as he was the only kid without an egg in his hand.
“I should make you clean off my car,” I responded.
“You can’t make me do squat, dead-eye!” he said, showboating for his friends.
Suddenly, I felt the little devil of mischief poking me with his pitchfork. I knew what those kids were thinking: He’s an adult, so he can’t do anything to us or he’ll get arrested. As Bugs would say, “They don’t know me very well!”
These were not very observant children. Had they been paying attention, they would have noticed that in my possession was a plastic Shop-Rite bag. Inside that bag was a dozen of eggs I had bought to make a Halloween cake for my niece’s Halloween party. Before I knew what I was doing, an egg mysteriously jumped into my hand. Suddenly, the ringleader stopped shooting off his lip. He and his cronies looked at me with an almost childlike “you wouldn’t!!” expression on their faces. I would.
I gave chase. I wasn’t always half-blind, and I wasn’t 12 anymore. I was 27. But I was 12 once, and I knew how to throw an egg. Plus, between 12 and 27, I played QB on a football team. So I’d gotten better at hitting targets much smaller than the Bergen Avenue bus. As the kids ran, I pummeled them with eggs. “You’re crazy!” the ringleader screamed. “RUN!” I yelled. “I’ve got more eggs!” 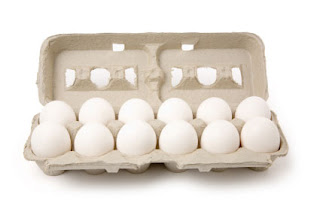 POW! POW! POW! I hit them three times each as we ran down the hill that constituted my block. I missed twice. As they ran across JFK Boulevard, I yelled out “only hit moving cars next time, you brats!” The ringleader yelled out an obscenity, but he didn’t stop running.
When I told my mother this story, she was livid. “You’re an adult!” she said. “For hitting those poor kids with eggs, you’re going to bust Hell wide open when you go!” I was going to bust it open even more widely; I neglected to mention to her the target of the last egg in my carton.
It hit the back window of the number 10 Boulevard bus. You're never too old for a little Mischief.
(Author Note: I’m just sitting at home this Mischief Night, but last year at this time, I was in Cardiff, Wales. On Halloween, I was in Dublin, Ireland. The Tale of OdieNary Madness that houses this crazy story is called “Dan Marino Bit Me.” But that’s a story for another time. Stay tooned!)
Posted by odienator at 11:39 PM 2 comments