We've got 2 B's and an A picture for my eighth dispatch from Noir City. Let's start with the B-side of Wednesday's The Unsuspected double bill, 1947's High Tide. 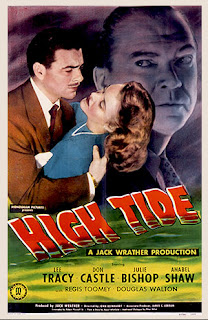 High Tide stars Lee Tracy, the actor who made the fast-talking newspaperman into a beloved trope. Czar of Noir Eddie Muller told us that by 1947, Tracy's star had become submerged in the hard-drinking lifestyle most befitting the characters he played. "But he had one more great role in him," Eddie said. And this is it. Tracy is excellent here as a guy who'll do anything to get the story, including posing the grieving widow of a gangster for maximum photographic effect.

Tracy's tenacious attempts to bring down the neighborhood gangsters gets him into serious hot water. "What good editor's life hasn't been threatened?" he asks at one point. So for protection, Tracy hires detective Don Castle (whom Eddie called "the poor man's Clark Gable" with good reason). Castle's doesn't seem to have done a good job; High Tide opens with the duo in a car that's just gone over a cliff and landed into the ocean. Castle's pinned under it, and Tracy's got glass sticking out of unpleasant places on his person. When the high tide comes in, it'll submerge them in a watery grave.

From there, the film employs flashback to tell us how we got here. The surprising story was presented to us at the Castro on a crisp 35-mm print that made this Poverty Row picture look sparkling. Watching Tracy manipulate the news evoked thoughts of how the 24-hour news cycle mimics Tracy's trickery on a much grander, more dangerous scale. Reporting the news has always been a business first; it's more about readership (or ratings) than accuracy. Such cynicism works well here in Noir City, but there's always a nasty jolt when these old classics feel too timely.

Let's stick with the B's and talk about the meanest man in Hollywood, Noir City veteran Lawrence Tierney. 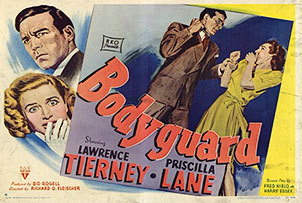 Not to be confused with that hideous Whitney Houston-Kevin Costner horror movie, The Bodyguard, Bodyguard finds Tierney in a somewhat nicer role than we've come to expect here at Noir City. That's not to say he's not the insubordinate badass we know and love, he's just restrained by Lawrence Tierney standards. Tierney plays Mike Carter, a detective who isn't above punching his superiors out and violating every order they give. Carter's equally surly toward a representative of the very rich Gene Dyson. The rep wants to hire Carter as a bodyguard for Dyson, the head of the very successful Dyson Meatpacking Plant.

Carter wants no part in protecting some rich dude, and is even less interested when he finds out Gene Dyson is really an old lady who wants nothing to do with him. But after an attempt is made on Dyson's life while Carter is at her residence, Carter becomes intrigued. This leads to all sorts of mayhem, including a frame-up and some nasty, gory dealings at the meatpacking plant. The idea of a corrupt meat company as this film's villain should be catnip to any vegetarian.

Tierney is assisted by love interest Priscilla Lane, who manages to bring out his softer side. But don't be fooled! Lane is no easy pushover. "I forget that kittens can still scratch," Carter says of her wily charms. They're a good team in this fun little feature directed by Richard Fleischer and co-written by future director of The Long Goodbye, Robert Altman. 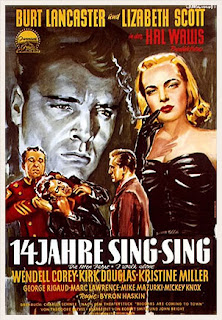 On the A-side of the bill is one of seven pairings of Noir City vets Kirk Douglas and Burt Lancaster. In I Walk Alone, Kirk and Burt are Prohibition-era booze runners who decide to split up when pursued by the law. Kirk gets away, but Burt winds up doing a 14-year bid in the pen. While Burt's rotting away, the only thing that sustains him is the thought that he owns 50% of the successful club Kirk's running. News of the club comes from Kirk's accountant and their mutual friend, Wendell Corey.

When Burt gets out, he learns that Kirk has no plans of cutting him in on this successful business venture. However, Kirk doesn't mind cutting him in on the pleasures of his moll, Noir City legend Lizabeth Scott. Scott's job is to seduce so that Kirk may destroy, but she finds herself drawn to her prey. Especially after she realizes that Kirk's just using her as a side chick; he plays to marry a wealthy older woman who brings business to his club. Suddenly, Burt's not the only one out for revenge.

Director Byron Haskin keeps things tight and tense while Charles Schnee's script manages to wring suspense out of even the most inane dialogue involving the mechanics of accounting. As the accountant caught in the middle of all this, Corey gives the film's most memorable performance, which is saying something considering this cast. Corey would return to Noir City in an even more memorable (and more sinister) role in the astonishing The Accused, which I'll talk about next time.

Next time: Loretta Young fights back.

Posted by odienator at 3:50 PM 0 comments 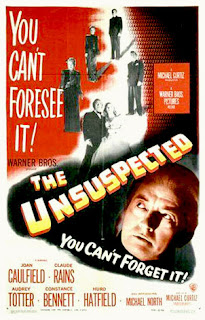 Michael Curtiz graced us with his presence on Wednesday, ushered in by the informative introduction of Noir City’s very own Alan K. Rode. Rode has written a book about the director of such Noir classics as The Breaking Point, so the Castro Theater got a crash course in Curtiz 101. We were then treated to the thrilling rollercoaster ride that is 1947’s The Unsuspected. With its return of the presumed dead missing woman story and its larger than life public figure character, The Unsuspected owes a bit of debt to Preminger’s Laura. But Curtiz and screenwriter Ranald MacDougall use these familiarities as mere jumping off points for a twisty thriller whose dialogue is as dangerously sharp as its sudden plot turns.

11-time Curtiz collaborator Claude Rains stars as the awesomely monikered Victor Grandison, star of the most popular--and most macabre--show on the radio, The Unsuspected. The Shadow knows what evil lurks in the hearts of men, and Grandison knows how that evil works its way down to their fingers. Each episode is a sordid tale of grisly mayhem such as The Woman With The Missing Head, with every murderous morsel described in Rains' sinister tone. This is back in television's infancy, when radio was still king. But radio programs still had to earn ratings to stay on. It's a dog-eat-dog world, especially here in Noir City, so the quest for ratings may lead to desperate measures being taken.

The plot of The Unsuspected sounds like something Grandison would use to entice his listeners. Grandison's secretary is murdered in an impressively shot opening sequence, her body hanged from his house's chandelier to make the death look like suicide. Whodunit? Or since this is a very twisty mystery, who's involved with doin' it? Could an accomplice be Althea Keane (Audrey Totter), Grandison's bad-girl sister, who telephoned the secretary just before she was murdered? Was it Jane (Constance Bennett), Grandison's assistant and co-writer of his ghoulish radio program? Or is it  Oliver (Hurd Hatfield), Althea's drunk of a husband whom she stole from her biggest nemesis, Matilda (Joan Caulfield).

It's certainly not Matilda, as she's dead at the time of the murder. But, just as in Laura, the mysterious pretty dead girl in the painting over the mantle shows up very much alive. This really pisses off Althea! With Matilda out of the picture, she's become the grande dame of the Grandison Estate. Victor favored Matilda, and now that she's back, she's got a lot of favoring to catch up on. This makes Althea cattier than an alley filled with empty tuna fish cans. Plus, drunken Oliver is completely open to rekindling romance with the one that got away.

Matilda has bigger fish to fry. She becomes the focus of a side mystery; she can remember everything about her time being shipwrecked, but she can't seem to recall that she married a man named Steven Francis Howard (Michael North) the night she went to sea. Steven makes a credible case for their nuptials; he seems to know everything about Matilda. She knows nothing about him, but when her heart starts leaning in Steven's direction, she thinks she might be suffering from selective amnesia.

There's a good reason Matilda doesn't remember marrying Steven: The event never happened. So, now we have another mystery! 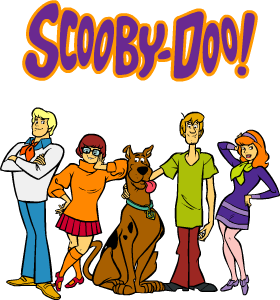 This movie has more mysteries than Scooby-Doo!


Steven had plans on marrying the murdered secretary. And he's suspicious that Victor Grandison had something to do with her demise. Since Rains is in creepy charm mode, he's a viable suspect. He's up to no good already, secretly recording people and then editing the recordings to say things his subjects never said. He also has an incriminating recording he uses to blackmail the heavy who does all of Grandison's dirty work. Both the heavy and Grandison's edited recordings will have their reckoning before fade out.

The Unsuspected is a very suspenseful picture, so I'll say no more. It's worth seeing not just for how Curtiz and company cleverly untangle the knots they tie, but also for the delicous dialogue and performances. Most notable are the two female Noir veterans, Constance Bennett and Audrey Totter. Bennett gets some of the sharpest lines in the script, and Totter plays the mean sister to an Oscar-worthy hilt. I've always harbored an unhealthy love for Totter, but after this performance, I was ready to rob a bank for her.

The Unsuspected made me think of Angela Lansbury's TV show, Murder, She Wrote. I have a theory about that show: Jessica Fletcher was a serial killer who killed everybody on the show so she could have fodder for her numerous books. She was Basic Instinct before Basic Instinct. It's up to you to find out if Victor Grandison is Jessica Fletcher before Jessica Fletcher. Anything is possible on the radio that beams content into the eager ears of the denizens of Noir City.

Next up: Robert Altman's '40's Noir and Burt and Kirk four decades before Tough Guys.
Posted by odienator at 7:40 PM 0 comments