Noir City XVIII #7: Once Upon A Time in Mexico


The last Saturday of Noir City sent us south of the border and deep into Mexican Noir. Four movies were presented, directed by the "three pillars of Mexican cinema," Julio Bracho, Emilio Fernandez and Roberto Gavaldón. Explaining the significance of each of these directors was Mexican film historian and preservationist Daniela Michel. Before each film, she spoke about the actors and the filmmakers. She also pointed out that Mexican noir existed in parallel with American noir, as evidenced by our first feature being made in 1943. 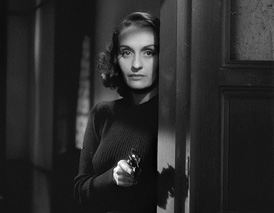 Distinto amanecer (Another Dawn) occupied the top half of our Julio Bracho double bill. Octavio (Pedro Armendáriz) plays a union organizer who has incriminating papers on a very famous politician. The guy doesn't take too kindly to a potential exposé, so he has Octavio tailed by a hat-and-sunglasses-wearing "energy inspector" who looks like Father Guido Sarducci's older brother. Eventually, Father Sarducci's bro follows Octavio to the apartment of Julieta (Andrea Palma, who reminds one of Marlene Dietrich). She's Octavio's former flame and she's also married to someone else, a civil servant named Ignacio (Alberto Galán). Octavio and Ignacio have a history, but let's not go into that here. Instead, let's focus on that "energy inspector."

Julieta notices he's following Octavio and her at a movie theater. The theater is showing a film with a catchy song that seems to never end. As that song drones on, Bracho creates a Hitchcockian level of suspense. The inspector seems to know their every move, showing up repeatedly and even telling his cohorts that Octavio is hiding in the ladies' room. (Those henchmen are pretty stupid, opting not to follow Octavio through a security exit simply because someone tells them they can't exit there.) Thinking they've ditched their tail, Julieta is surprised to find him at her doorstep holding a bag of scones.

The duo tie him up. Throughout, the inspector very convincingly begs for his life, mentioning that he has a wife. When Octavio briefly steps out, he leaves his gun with Julieta. Soon, the inspector manages to free himself and winds up being shot dead by Julieta. One of the numerous plots driving this picture involves disposing of the body. This too is presented with a good amount of suspense.

Distinto amanecer has too much going on for a brief summary, but like many other films in this year's lineup, it casts an accusing eye on a corrupt agency and proceeds to criticize it in the strongest terms possible. I spent so much time on the inspector character here because the movie never recovers after he's bumped off. Things just aren't as intriguing, even if the story remains watchable. However, Bracho provides a bittersweet payoff of sorts when the inspector's wife shows up at Julieta's house looking for him. She muddies the water by saying he was an actual inspector. Then she eats the scones that were probably intended for her anyway. I was left wondering if the guy were simply a cog in that corrupt political machine forced to use his actual job as a front. Or perhaps he was just as evil as he seemed initially, and his poor wife was clueless about his shenanigans. I admit that this is all tangential to the protagonists' story, but sometimes the side streets are just as interesting as the main roads here in Noir City. 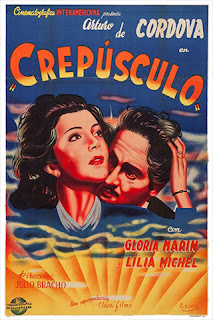 Our tour through the day now takes us to twilight. Bracho's Crepusculo (Twilight) is a twisty, flashback filled tale of obsession featuring absolutely zero occurrences of sparkly vampires or Kristen Stewart. This Twilight concerns a surgeon consumed with guilt over a failed operation. Dr. Mangino (Arturo de Córdova) is so wrapped up in the issue that he's written a book about it called, you guessed it, Twilight. Expect lots of gorgeous shots of the titular event courtesy of the very prolific cinematographer, Alex Phillips.

Dr. Mangino first sees the object of his affection, the gorgeous Lucia (Gloria Marín), at a moment where she is literally being objectified. He walks into a sculpting class where she's the model. Phillips, Marín and Bracho beautifully play up the sensual aspect of this sequence, flirting with nudity while a simulated rapture crosses Lucia's face. In that moment, we're placed inside Mangino's obsession and we feel his euphoria, and the two fall into a romance interrupted by the doctor's fame and traveling engagements. Later, when Lucia discovers that Mangino has one of the sculptures, she comments that he's still managed to possess her even though she's now married to his brother, Ricardo.

If coming home to find your obsession is now your sister-in-law isn't bad enough, imagine now having her sister lusting after you. This love square can only end badly, and Crepusculo drops a few bombshell hints early on that it will not. For starters, Lucia mentions that Ricardo is dead and Dr. Mangino is no longer practicing surgery (instead he's teaching his book). Through flashbacks and eerie dream sequences, we learn the entire story and it's more than a bit soapy and melodramatic. But you'll get no complaints here--this is my kinda stew--and even if you find the proceedings a bit unbelievable, the atmosphere created by Crepusculo will still draw you in. Watching it feels like slowly drowning in a dense fog of dangerous desire, hoping for it to clear just long enough for you to catch your breath. 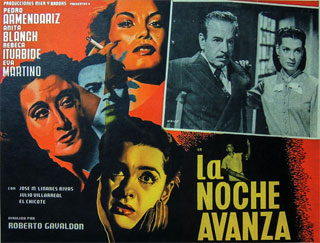 As night fell on Noir City, the evening double bill opened with the appropriately titled La Noche Avanza (Night Falls). Reuniting us with Pedro Armendáriz, Roberto Gavaldón's 1952 feature was the most noirish of the four Mexican noirs. Matinee idol Armendáriz is fantastic as Marcos, a jai alai player who, to quote Eddie's introduction, is "a real shitheel." The Czar of Noir was being polite. Marcos is one of the most hissable villains to ever delight us denizens of Noir City. The man kicks a dog who dares walk too close to his fancy car, for cripe's sake! Don't worry! The dog gets his revenge in one of the most gonzo final acts I've ever seen.

Marcos' jai alai prowess comes with a heaping side of braggadocio and an extra helping of cruelty. He torments his teammates and treats the women he's involved with like dirt. The women include his latest flame, Sara (Anita Blanch), his older, rich lover Lucrecia (Eva Martino) and, most troublingly, the teenaged Rebeca (Rebeca Iturbide) whose adolescent longings Marcos horribly manipulates. However, Rebeca is the biggest thorn in Marcos' side and the potential key to his downfall. She owns some scandalous information that she uses in the hopes that Marcos will marry her. Knowing this, Marcos appeals to the patriarchial hierarchy represented by Rebeca's powerful father. These scenes are damning indictments of how men saw women as toys to be played with, then discarded.

La Noche Avanza invites you to bear unflinching witness to its anti-hero, but you can sense an undercurrent of contempt as if the movie, like the audience, is quivering with anticipation to see Marcos get his. Nowhere is this more evident than in its final 20 minutes; the film simultaneously tightens the screws of suspense while going completely off the rails plotwise. Gavaldón and the fearless Armendáriz play the audience like a violin, eliciting gasps and applause in the process. Just when it looks like Marcos' sinister plans will pay off for him, the film reveals the ultimate surprise as justice is meted out in the coldest way possible. Indeed, the darkest hour is just before dawn here in Noir City. 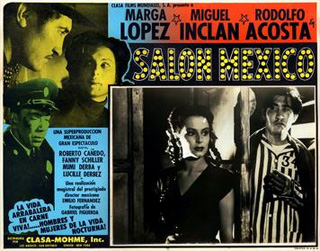 Last, but certainly not least is a prime example of Mexican cabaretera courtesy of Emilio Fernandez. He's been here before; Noir City XIV showed his cabaretera Victimas del Pecado, a film that elicited the biggest bout of applause I've heard at any Noir City I've attended. Salón Mexico tells a similar story--par for the genre--of a woman who goes to extreme lengths to protect and support a family member. She must work in a dancehall/cabaret, a shameful profession that guarantees the movie will have some killer musical numbers, and she will suffer as only the best martyrs can to ensure her familial goal will be met. As a kid, I called this type of movie "Stella Dallas movies" because that was the first film I'd ever seen like this.

Of course, more than dancing is going on at this dancehall. The protagonists of these films is usually the "hooker with the heart of gold" whose honor is defended by her own strength and the occasional devotion of a nice guy. Here, Mercedes (an excellent Marga Lopez) is putting the sister she has raised since their parents' died through a fancy private school so that she can avoid the struggles that will befall her without an education. As the film opens, Mercedes enters a dance contest with her pimp Paco (Rodolfo Acosta). She needs the money for this month's tuition. When Paco keeps the dough instead, Mercedes steals it back, an example of her take charge nature and refusal to be a victim.

Mercedes will face trial after trial before the end credits, and she'll work through them as best she can while earning the audience's hope that she succeeds. Looking after her is a kindly widowed police officer, Lupe (Miguel Inclán), who is in love with her but can't help her out of her situation financially. He becomes a guardian angel, which makes the viewer assume that he'll buy the farm in the movie's ultimate injection of darkness. What actually happens is far, far worse. Paco gets involved in criminal activity, dragging Mercedes into it with dire results. Meanwhile, her clueless, ungrateful brat of a sister whines that Big Sis won't come to her damn school plays!

Mercedes achieves her goals, but this is no happy ending. It's bittersweet at best. As much as I like these movies, and the "weepies" Hollywood churned out, I never held much affection for the people the protagonist sacrified themselves to save. As a kid, I wanted Barbara Stanwyck to bang on that window and explain everything, and on Saturday night I wanted Mercedes to beat her sister's ass while yelling "do you know the mierda I've been through for your trifling behind?!!" Alas, Noir City isn't about what I want, it's about what I need. And this year's slate of International Noirs fit that bill.

See you next year!
Posted by odienator at 4:05 PM 0 comments