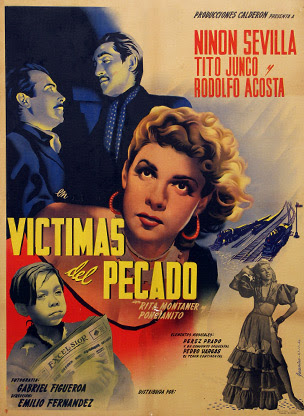 Every year, there's at least one moment that sends Noir City audiences into a tizzy of raucous applause. The Mexican noir, Victimas del Pecado (Victims of Sin) provided Saturday afternoon's roof-raising cheer. This film is part of the cabaretera genre, which reverses the usual gender roles of noir while filling the screen with cabaret-set musical numbers. Toss in a long-suffering dame and buckets of melodrama, and you have a movie that screams out for a Ross Hunter-produced remake, shot in garish Technicolor. If Hunter had miraculously gotten this material past the Hays Code, he would have had no choice but to import Victimas del Pecado's leading lady, the fabulous Ninón Sevilla.


Sevilla plays Violeta, a performer at Cabaret Changó. In the cabaretera film, it's the woman who falls victim to the homme fatale, and we root for her to persevere against all odds. Victimas del Pecado won't make it easy for Violeta: She survives prostitution, prison, poverty, and a beating far too severe for any American movie made in 1951. But she's hardly the victim in the title. That honor goes to the adorable little boy surviving on the street while awaiting Violeta's return.

The sultry Cuban dance stylings of Señorita Sevilla are a huge hit at the Changó, a place where the private dancing is overseen by a vicious pimp named Rodolfo (Rodolfo Acosta). When one of the performers shows up with Rodolfo's infant son, he cruelly makes her choose between him and the kid. Shockingly, she tosses her baby into a trash can. Violeta rescues him, claiming him as her own. A kitchen sink full of trouble gets thrown at her the second she picks up that kid.

Victimas del Pecado was directed by prolific Mexican filmmaker Emilio Fernández. Known to American audiences as Mapache in Peckinpah's The Wild Bunch, Fernández's direction reminded me of a different Sam, Sam Fuller. The shot of a police line-up of angry streetwalkers who have just rescued Violeta from the aforementioned vicious beating is pure Fuller; these tough broads wear their bruises with pride as the camera pans by to congratulate their heroism. And when the great Cuban singer Rita Montaner is fired from the Changó, she gives a fiery speech that incites the patrons to riot. Mr. Fuller would approve.

Fernández embraces the grunginess of his film, infusing it with over-the-top doses of melodrama that buoy the emotions of its surprisingly happy ending. When Violeta falls for Santiago (Tito Junco), another pimp who doesn't mind she's raising someone else's kid, it sets up a showdown between good pimp and bad pimp. When that ends tragically, and Rodolfo claims his son for criminal intent, Violeta becomes an angel of vengeance, a Mama Bear who rescues her son the way Richard Roundtree's Shaft would have. When Ninón Sevilla crashed through a window, fire in her eyes and guns-a-blazing, the rafters of the Castro shook with whoops of audience approval. This is how a Mama protects her boy in Noir City.

Also from Mexico in 1951, En La Palma De Tu Mano (In the Palm of Your Hand) is a twisty little treat that pits a rich, murderous widow against a con artist posing as a fortune teller. With his smoke-filled crystal ball, Professor Jaime Karin (Arturo de Córdova) brings the Miss Cleo for gullible, superstitious Mexican women who pay handsomely for his services. Helping the professor get the best dirt for his "predictions" is his beautician wife, who provides more practical services for Karin's clientele.

Through gossip at the salon, Karin discovers that a millionaire has gone to the great Swiss Bank Account in the Sky. Karin targets the widow, Ada Romano (the gorgeous, icy Leticia Palma) in the hopes of swindling her. Had Karin an inkling of actual second sight, he'd know to target a different rich dame. Not only has Mrs. R. murdered her husband, she's setting up Professor Karin to help her knock off the co-conspirator nephew with whom she's been sleeping.

Director Roberto Gavaldón crafts a riveting tennis match between Karin and Romano, with the tide turning in either's favor numerous times. We're never sure who has the upper hand, though if you're any student of noir, you've got a good chance of predicting the ultimate victor. Professor Karin, as despicable as he is, keeps on the good side of audience by executing an occasional good deed. Mrs. Romano fascinates us by alternately playing the role of predator and prey.

Cordova and Palma are both excellent, two nearly-perfect foils who deserve each other, but En La Palma De Tu Mano serves its coldest slice of justice by putting its most innocent victim on a slab in the morgue. The shocking karmic bitchslap is felt both by the character to whom it is dealt, and by the audience. So far, this has been the coldest ending dispensed on us hardened viewers.

Last but certainly not least is Hollywood's take on Mexican noir, 1949's Border Incident. Made at MGM during a time when Leo the Lion was starting to cast his gaze at darker fare, Incident looks at Mexican migrant workers illegally entering California to work during harvest season. Directed by Anthony Mann years before the famous Westerns that would define him, Border Incident stars Ricardo Montalban in a rare role as an actual Mexican (in an interview with Eddie Muller, Montalban lamented "Hollywood cast me as everything but what I actually am--a Mexican!"). The pitchman for Corinthian Leather is matched with George Murphy, whom I knew primarily from his hosting duties on the MGM Parade.

Casting two MGM musical stars in a hard as nails noir seems odd until you bear witness to what Mann puts on the screen. Brilliantly shot in darkness by John Alton (who'd win his cin-tog Oscar two years later for An American in Paris), Border Incident sends Murphy and Montalban undercover as a crook pitching fake immigration documents and a Mexican attempting to illegally hop the fence respectively. Splitting screen time between the duo, the film creates two separate but equally fascinating threads. As the threads slowly begin to knit together, Border Incident gets nastier, culminating in a harrowing, brutal death for one of its leads.

The timely plot is somewhat undercut by a goofy, though common for 1949 movies, narration that shows up in prologue and epilogue form. Still, Mann and company deliver a noir that's as pitch black as its stunning cinematography. The one time Hollywood let Ricardo Montalban be that which he was, he turns in one of his best performances.

Next up: Nighttime is the right time for Restorations.
Posted by odienator at 5:24 PM