Long before Hugh Laurie's Dr. House, Noir City was full of self-medicated doctors--and they had better reasons for their addictions. The Castro Theatre bore witness to two such physicians, courtesy of writer-directors Akira Kurosawa and Wolfgang Staudte. Let's start with Staudte. His film, DIE MÖRDER SIND UNTER UNS (The Murderers Are Among Us) is easily one of the best noirs I've seen. Made just a year after the end of WWII, this German film was financed by the Soviets and made a star of its female lead, Hildegarde Knef. Despite having his darker, more vengeful ending changed, Staudte's movie is a stunning condemnation of Nazi atrocities, made all the more powerful by the timeframe in which it was produced. In addition to its compelling story, Murderers serves as a time capsule of what postwar Germany looked like in 1946, and what services were available to its inhabitants.

Wilhelm Borchert stars as a doctor prone to drinking himself into a stupor before staggering home to the disdain of his neighbors. The war has made Dr. Mertens a barely functioning wreck, but for much of The Murderers Are Among Us, his role is left undisclosed. Staudte shoots him like a ghost walking through the rubble of Berlin en route to a drink or a night club. Even drunk, Mertens somehow manages to find his way back home. This familiarity with his surroundings will come into play later, while he's plotting his revenge.

Disrupting the doctor's routine is the return of Susanne (Knef), a concentration camp survivor who used to occupy the doctor's apartment. Since technically she still has a lease, Mertens is forced to find other arrangements. Susanne offers him half the apartment, much to his chagrin (he'd prefer if she left), but he acquiesces to the living arrangement.

As they share the apartment, Susanne returns to the rituals of daily life. She washes Mertens' clothes and cooks for him. There's comfort in returning to old rituals after her time in the camps. But the doctor, who was in a far better position than Susanne during the war, repels all notions of a return to normalcy. He remains dead inside until Susanne finds a letter given to Mertens by his former war captain. The letter was to be delivered in the event of the captain's death.

Mertens tells Susanne to let sleeping dogs lie, but as he warms to her, he agrees to let her deliver the letter to his late captain's widow. Upon delivery, Susanne discovers that Captain Brueckner is still alive. This development sends Mertens on a downward spiral of revenge. He sets out to kill his former superior officer.

His first attempt is foiled by a great scene where the doctor rediscovers the joy he once felt in his medical calling. But this is a pitch-black noir, so expect that respite to be short-lived.

What Brueckner did, and whether the doctor was complicit, I'll leave for you to discover. When you do, notice how Staudte shoots the scenes of confrontation between Mertens and Brueckner. In the climax, Brueckner is framed in Mertens' shadow as the shadow grows to gargantuan proportion. Other noirs have done something to this effect, but the imagery Staudte composes pushes this scene to the top of the list of great noir moments. After all, noir lives and dies in its shadows. 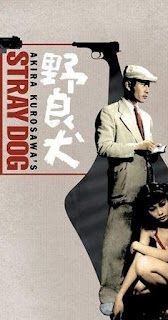 Akira Kurosawa and his favorite actor, the great Toshiro Mifune, got their own noir night at Noir City. Mifune brought his trademark intensity to both sides of the law in 1949's Stray Dog and 1948's Drunken Angel. The former marked the duo's first collaboration, and the latter finds them already settling into the groove they'd reside in for 16 films.

Drunken Angel casts the equally great Takashi Shimura as the titular character, a doctor whose bedside manner is intense and comically mean. Into his office comes Matsunaga (Mifune), whose yakuza ties are responsible for the bullet in his hand. Dr. Sanada brutally removes the bullet without anaesthesia ("none of that for your type," growls Sanada), but briefly softens after discovering Matsunaga has tuberculosis. When Matsunaga stubbornly refuses to stop boozing and whoring so that he can recover, Dr. Sanada returns to his normal level of screaming and lecturing.


Kurosawa plants one of the great cinematic grumps in a tale of redemption and hope. Using the filthy, polluted swamp stagnating in the middle of town as a symbolic metaphor, Kurosawa tackles the postwar return of organized crime, and how power can be as deadly a disease as tuberculosis.

Sanada constantly threatens Matsunaga, but as the former colleague who sent him to Sanada knows, Sanada is a tenacious pitbull when it comes to trying to save his patients. He takes on more powerful men, and equally tenacious women, to get his job done. Mifune is an intense actor, but he's matched note for note by Shimura. When a doctor is scarier than the Yakuza, you'd better follow his prognosis to the letter.


1949's Stray Dog reteams Shimura and Mifune, this time as a seasoned and a rookie cop respectively.  In the opening scene, Detective Murakami (Mifune) loses his gun to a pickpocket on a crowded bus. This puts him on a rollercoaster of guilt, grief and anxiety. The rollercoaster speeds up when Murakami's gun is used in a series of crimes. Detective Sato (Shimura) warns Murakami that the gun situation will burn him out if Murakami keeps reacting at this level. The far wearier Sato has been down this road, and though he is a good mentor and assists Murakami in trying to crack the case, he can't change Murakami's emotion-filled approach.

Kurosawa uses the stolen gun as an embarrassing neutering for the cop and a symbol of masculinity for the criminal who uses it. He shows how crime wears down those who swear to protect society. An early scene of Murakami falling deeper and deeper in despair seems to go on forever, to the point where you wonder if Mifune will collapse under the stress. A later scene where he does crack under pressure is one of the most powerful moments his beloved director has filmed for him.

Stray Dog also presents a theme that Noir City will revisit: The incredibly stupid young girl in love. Between this film and Brighton Rock (which I'll cover later), I'd had my fill of this character. Despite being played superbly by Keiko Awaji (who passed away on January 11, 2014), you'll want to choke her immature showgirl, especially when you see how much pain she causes Murakami. Maybe I'm being a tad harsh, but you know how I prefer my women here in Noir City.

Next time: Death by cars and caresses, and how a more experienced dame deals with being stupidly in love with a killer.
Posted by odienator at 1:46 PM