Noir City XVIII #6: The Devil Is In the Details


Cinematography is my favorite aspect of a movie. Noir cin-tog ranks high on my list of the cinematic things I love. Color may be in fashion, but nothing gets me going like crisp, silvery, shadowy and sinister black and white. Thankfully, Noir City is full of this kind of imagery as evidenced by the two films covered in this dispatch. One is from Japan, the other from Germany, and they were both presented in 35mm prints that looked handed down personally by God. I've had the privilege to visit both countries (and ich spreche Deutsch, believe it or not), but never like the protagonists of this duo. 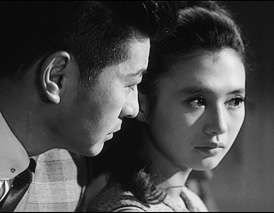 Masahiro Shinoda's 1964 classic Pale Flower (Kawaita Hana) combines the popular yakuza-style films popular with audiences with a love story that's so ice-cold it's actually hot. The two "lovers" never consummate their relationship--they don't even kiss--and yet every frame they share together smolders intensely. To use the purple phrase that adorned more than one pulp novel's front cover, these two are "addicted to thrills!" The result is truly hypnotic, thanks to Shinoda, his editor Yoshi Sugihara, his sound department and the movie's MVP, cinematographer Masao Kosugi.

Kosugi's camera loves the lead actress, Mariko Kaga, specifically her gaze. She stares silently out into the distance and her stillness evokes a series of sometimes contradictory responses. Is she reflecting evil? Boredom? Lust? Vengeance? Sadness? Or is she simply just existing from moment to moment, riding the ebb and flow of life by instinct and without contemplation? Whatever she's up to, she looks into the ether (and by extension, at us) with full knowledge of the secrets she's keeping. That aura of mystery propels the narrative and the interplay between her and Muraki (Ryô Ikebe).

Kaga plays Saeko, which, I kid you not, is pronounced psycho. Muraki first encounters her at a gambling den where his return is warmly received. Muraki has just been released from prison after serving time for killing a rival. The crime world to which he returns looks nothing like the one he left; opposing factions are now allies and Muraki feels like a samurai without a master. Even the moll who has waited loyally for him has lost her appeal. This ronin's journey feels aimless until he meets Saeko.

Shinoda sets several scenes in the gambling den, using the croupier's incessant, rhythmic chanting as a hypnotist's tool. The sound lulls us into the seductive world of playing games for cash. Even though there's no explanation of the rules of the game, it doesn't matter. This is all about mood and sensual response. Saeko is a high-roller, a rarity for a woman in these places, and she's fearless even when losing her shirt. Nothing fazes her. She doesn't even have that "I'll win my money back next time!" vibe that most gamblers vibrate with when they're losing. Saeko is so chill she puts the laissez in laissez-faire.

Of course, this intrigues Muraki. The sense of danger and the unknown cements his involvement with Saeko. She drives a fast car recklessly and laughs constantly as the adrenaline rush consumes her. Meanwhile, in the background of this tale of l'amour fou is a subplot that potentially offers Muraki a return to his assassin ways, in a sense giving him an expected purpose.

All this is presented in a cool, matter-of-fact fashion that's surprisingly sparse. Eddie Muller called this "an existential noir" and that's the best description of this gorgeous must-see. While you're at it, check out the story of actor Ikebe. It's fascinating, and once you know it, you'll understand how deeply entrenched he is in portraying his character's knowledge of failure and loss. 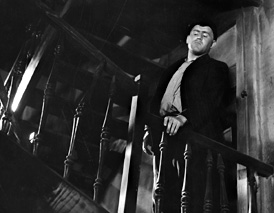 Robert Siodmak is a staple of Noir City, a man Czar of Noir Eddie Muller considers the foremost purveyor of film noir. Though he worked in Hollywood, and was born in Memphis, Siodmak was the son of Germans who took him back to be raised in Germany. Siodmak made his bones in Paris and Hollywood after fleeing the Nazis, but in 1957 he returned to his homeland to make The Devil Strikes at Night, a movie whose serial killer plotline serves as an entry point into a pessimistic tale of totalitarianism.

Siodmak's film feels like an encapsulation of all the themes and tropes we've seen here in Noir City 18--groupthink, high-level corruption, low-level scapegoats, etc. The trait most specifically seen here is the timeliness of the tale--it's as if these films are elder statesmen speaking to us from the depths of an earlier time to implore that we not allow history to repeat itself. The government cover up presented here looked eerily similar to what's going on here in America right now. It's surreal that this was the film that ran on Friday evening, considering what had happened earlier in the day.

Devil is based on the true story of Bruno Lüdke, an alleged serial killer played here by Mario Adorf. Lüdke may have murdered 51 people between 1933 and 1944, most of whom were women. We see the horrific results of his handiwork early on when he strangles a woman in a basement. Her innocent lover is charged, but Kriminalkommissar Axel Kersten (Claus Holm) doesn't believe they have the right party. Instead, he thinks this is the work of a repeat offender. Since Lüdke isn't the most careful of killers, he's eventually caught. The movie is half over when he is.

What happens next is what makes this film so urgently important today. Lüdke's capture after a decade long killing spree flies in the face of the image the German government wants to project about itself and its "pure" Aryan citizens, all of whom are supposed to be too perfect to ever be wrong or corruptible. Lüdke's existence presents a hellish Catch-22 of nationalistic idiocy: Germans like him aren't supposed to exist and the federal police are so good that they would have immediately caught him had he existed. A scapegoat is necessary to save face while Lüdke somehow needs to get swept under the rug.

Aided immeasurably by his cinematographer, Georg Krause, Siodmak presents some of the most harrowing visuals of this year's festival, putting this right up there with the earlier Czech film ...and the Fifth Horseman is Fear. There's a masterful flashback sequence that puts us in a murderer's mind and several Hitchcockian touches that up the suspense while not undercutting the suffocating pessimism that infuses every minute. The film's final line and image really hammers that feeling home. As I said before, noir is one of the genres often imbued with allegory. Couple that with the standard cautionary tale characteristics and you occasionally get a terrifying warning like The Devil Strikes at Night. The even scarier question is: Will we listen?

Next time: Closing things out with Mexican Noir
Last time: To the Victor go the spoils
Posted by odienator at 3:38 PM