Noir City XVI #3: Then They Came For Me 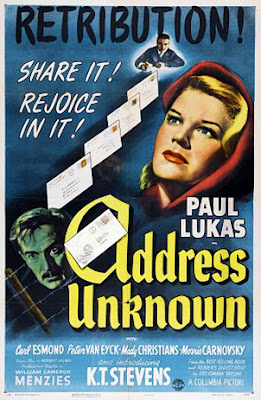 As we chronologically navigate Noir City from 1941 to 1953, we've viewed films that were made before and after the United States became involved in WWII. As such, each movie has tried to incorporate some semblance of acknowledgement that the country is at war. So far, we've seen various mentions in passing, usually presented as a treasonous activity by the villains. But on Saturday night, denizens of Noir City were sideswiped by the timeliness of a powerful 1944 film by the legendary William Cameron Menzies.

Though Menzies was commonly known for his art direction, he was also quite frequently called upon as a "director doctor," the guy who took control behind the camera to save films in trouble. As a result of both skills, Address Unknown is a crisply directed, great-looking feature that doesn't waste a single moment of its short 75-minute runtime. This was not made for a lot of money, but its technical proficiency resulted in Oscar nominations for music and art direction. The latter nod is interesting, as there is nothing very flashy about the art gallery, German mansion and theater where most of Address Unknown takes place. However, the way Menzies shoots these locales and the actors within them elevates the sets' status; at times an area can dwarf its inhabitants, and at other times, that same area can seem small enough to entrap and suffocate.

Address Unknown tells the story of the rise of Nazism in Germany through the friendship of two business partners, Max Eisenstein (Morris Carnovsky) and Martin Schulz (Paul Lukas, fresh off his Best Actor Oscar win for Watch on the Rhine). These two families are so close that their progeny have plans to marry. Max's daughter, Griselle (K.T. Stevens) puts the impending nuptials on hold so that she may pursue an acting career in Germany. She will accompany the German-born Martin back home for a year while Martin's heartbroken son Heinrich (Peter van Eyck) remains in Max's employ.

Once the Schulzes are back in Germany, Max starts to notice a change in his friend. These changes are shown to us but are reflected to Max in the epistolary correspondence he maintains with Martin. Martin's letters become complimentary toward Hitler, then become even more ominous in their demands that Max not say certain things against the Nazis. When Martin suddenly asks Max to stop writing, Max becomes fearful for his Jewish daughter's safety. His fears are confirmed with a heartless, cruel two-sentence letter from Martin. 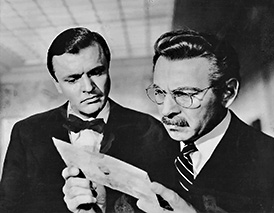 Address Unknown refuses to sugarcoat anything. Despite showing how the German government censors content, stokes anti-Semitic hatred and governs by fear, the film does not let Martin off any hooks. Herr Schulz has clearly drunk the Kool-Aid figuratively served to him by the high-ranking Baron von Friesche (Carl Esmond). Lukas gives a daring, commendable performance. He plays the role in "I was only taking orders" mode for much of the film, only showing true cowardice in the tight closeups Menzies affords him once the powers that be finally come for him. As Martin Niemöller's famous saying goes, Martin learns that there is no one left to speak for him.

Herbert Dalmas' script (adapted from the novel by Kressmann Taylor, a pseudonym for Kathrine Taylor) gets maximum mileage from the mail system, especially when Martin starts receiving "coded" letters from Max. The letters are meant to arouse suspicion--all mail is being read by the government and it's illegal to send anything they cannot decipher. While this vengeful action is firmly within the Noir tradition, Address Unknown has bigger fish to fry. It's a blatant statement, clear and unafraid in its straightforwardness. And it has terrifying parallels to some of the things we're seeing today.

After the film, an acquaintance of mine asked me who would have seen it in 1944. Since it's a Columbia release, I assumed it would have played in regular theaters as the bottom of the double bill. The bigger question I had in return was "who would make something like this today?" With news outlets embarrassing themselves trying to show the softer side of blatant evil, I shudder to think that a film like this couldn't be made today. At least we have Address Unknown, which should be shown every chance it can get. We need to see this daring movie. Cautionary tales, even ones that trade the usual frivolity for utter seriousness, are par for the course here in Noir City.

Next time: A return to frivolity.

Posted by odienator at 1:55 PM