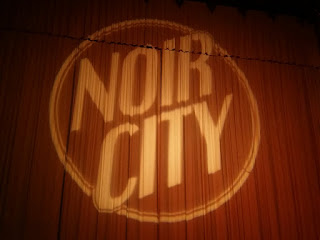 Film Noir Foundation's 16th Noir City Film Festival opened last Friday night at the famed Castro Theatre in San Francisco, and this year marks a personal milestone for me. This is my tenth time at the festival, and without fail I have loved every single moment of being a denizen of Noir City. I may not get the money, and I never get the woman, but I always go home satisfied. If nothing else, I have the relieved joy of knowing my luck is a lot better than the folks projected on the mighty Castro theater screen.

This year, celebrated Czar of Noir Eddie Muller has gone deep into the crates, pulling out films that I have never heard of before. The method to his madness this year is a return to the true nature of double features, that is, a bill featuring one "A-movie" and one "B-movie." The 12 double bills are presented in chronological order, highlighting the evolution of the genre. It's all right there in the Noir City subtitle: "Film Noir A to B 1941-1953." 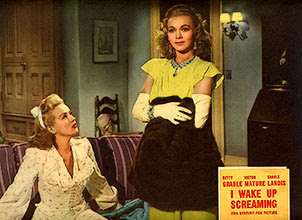 Noir City XVI opened with a double bill from 1941. Assisting Eddie in presenting the first film was Victoria Mature, daughter of the star of I Wake Up Screaming, Victor Mature. In addition to belting out a kickass a capella version of Alfred Newman's Street Scene, which figures prominently in the film, Victoria dished about how it felt to see her hunky Papa onscreen in his youthful heyday. After all, he was 64 when she was born. 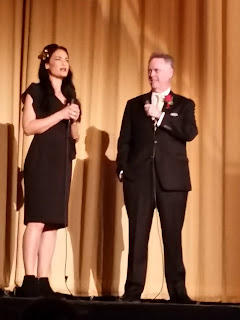 Eddie and Victoria talk about the star of One Million B.C.


I Wake Up Screaming sounds like a horror movie, but the only terrifying thing about Bruce Humberstone's early Noir influence is its score's near-constant use of The Wizard of Oz's Over the Rainbow. Initially, I questioned how a song from an MGM movie found its way into a 20th Century-Fox release, but after the seven bazillionth time it cued up on the soundtrack, I was praying for Dorothy's house to fall on me.

Assault by Harold Arlen aside, I Wake Up Screaming is an intensely entertaining whodunit co-starring WWII pinup gal Betty Grable. Grable plays Jill Lynn, the sister of Vicky (Carole Landis), a waitress whose sudden ascent into high society ends with her murder. This murder kicks off the film, which hops between past and present with alternating narration by Jill and the accused murderer, Frankie Christopher (Victor Mature). Sports promoter Frankie is responsible for Vicky's introduction into the glamorous world of Hollywood: he makes a bet with his snooty industry buddies that he can turn the unrefined hashslinger into a perfect society dame. It's Pygmalion as if George Bernard Shaw had been possessed by Agatha Christie.

Dwight Taylor's adaptation of Steve Fisher's novel stacks the deck with potential murderers, including Noir City regular Elisha Cook, Jr. We can pretty much rule out Frankie's guilt, as it would be anti-climactic. But even Jill looks suspicious at one point. The most compelling suspect is Ed Cornell (Laird Cregar), the lead police detective on the case. He's first seen in a Jill-related flashback. During her interrogation by the cops, Jill remembers seeing a creepy looking man staring at Vicky through the restaurant window. When Cornell enters the room, Jill recognizes him but the cops disavow her panic.

Cornell is so convinced that Frankie is guilty that he starts stalking him, breaking into Frankie's house to watch him sleep or to surprise him. Cornell harasses Frankie mercilessly, and we start to suspect that Cornell is doing so to distract from the possibility that he's the killer. I won't give away whodunit, but I will state that Cregar gives a fearless and complex performance, especially when his motivations for torturing Frankie come to light. Cornell is in the Noir vein of determined thorns-in-the-side like Edward G. Robinson's adjuster in Double Indemnity, but his tenacity is emotion-based rather than detail oriented. Cornell is Les Miserables' Javert reimagined as a man whose desire to torment his obsession stems from a warped sense of romantic entitlement. And Cregar gives an unforgettable performance that will leave viewers conflicted.

Edward Cronjager's cinematography bathes the proceedings in the finest, shadowy traditions of the Noir features we've come to love. Many of those films seem to crib directly from Cronjager's work, either enhancing it or commandeering it. His ominous, sometimes playful use of shadows and angles are enough to send any Noir fan's heart into appreciation overdrive. Images like this are why black and white cinematography will always be better than color.

I Wake Up Screaming was paired on opening night with Among the Living, which Eddie called "a horror Noir." Its pedigree includes Dracula writer Garrett Fort, who infuses the proceedings with Southern Gothic terror and scary movie tropes. This one's bonkers, folks, with Albert Dekker as a set of twins, one good and one evil. The evil one, Paul, was supposedly buried at 10 years old, leaving the good one, John, to mourn the loss for decades. In reality, however, Paul had been driven insane by his mother's screams during her abuse at the hands of his father. Paul's descent is helped along by a nasty bit of head trauma delivered by his father. Rather than risk shame, the family hires Dr. Saunders (an evil Harry Carey) to fake Paul's death. Paul remains hidden in the attic for decades.

When the abusive father dies, John returns home for the funeral. John has everything going for him--he's a success married to an understanding wife (Frances Farmer). He knows nothing about the maniacal twin who likes to strangle people and then position their bodies to look like Edward Munch's painting, The Scream. But he's about to find out just how much trouble Paul can be.

Paul escapes from his attic prison and rents a room in town. His scraggly beard marks him as the "evil twin," so of course, he'll eventually shave it off so he can be mistaken for John. The catalyst for the close shave is Millie, an enticing, flirty troublemaker played by my favorite scenery chewer, Susan Hayward. Nothing is ever subtle about Susan Hayward; she makes Millie's sexuality run down the screen like a torrential rainstorm. I could imagine Joe Breen looking like one of Paul's dead victims when he saw this picture.

Millie's misidentification of John as Paul leads to scary scenes of mob justice, mayhem and murder, all rendered in the perfectly noirish cinematography of Theodor Sparkuhl. Somehow all of this works. Maybe it's not as the most credible of Noirs, but Among the Living is one of the more fun ones we've had here in Noir City.

Next time: Books, bobs and blues for Uncle Charlie.
Posted by odienator at 11:31 PM