Saturday's double matinee at Noir City offered we happy denizens a dose of Ladd and Lake, some catnip for bookworms, a favorite of Alfred Hitchcock and the most harrowing, timely feature the festival has ever shown. That last one deserves a piece all its own, so let's talk about the other three for now. 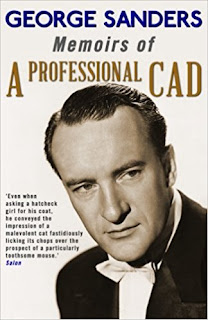 It was inevitable that George Sanders would eventually play something feline. His voice is that of the world's most contented cat, one who so relishes his mischief that every line he utters vibrates with self-satisfaction. And while Shere Khan the Tiger in Disney's The Jungle Book appeared a tad too cutesy to house such aural malice, his species is a perfect match for Sanders' impeccable delivery.

I bring this up because Sanders has a line in the deliciously titled Quiet, Please: Murder that conjured up images of a cat that had not only eaten the canary, but enjoyed every single flavor-invoking burp afterward. When Myra Blandy (Gail Patrick) points out that Jim Fleg (Sanders) is a masochist looking for the right sadist to tickle his fancy, Fleg simply responds "yes." The sexy purr with which Sanders underlines the word is magnificent.

That's right, folks! Jim Fleg is into all sorts of S&M, and the dialogue in Quiet Please: Murder is jaw-droppingly kinky by 1942's standards. The joys of giving and receiving pain always simmer underneath the trappings of Noir, but here they bubble close enough to the surface to burn the censor.  Director John Larkin and his cast get away with such deviltry by wrapping the randy proceedings in a plot that involves the theft of rare manuscripts from the Los Angeles Public Library. The plot makes absolutely no sense, but there's never a dull moment. 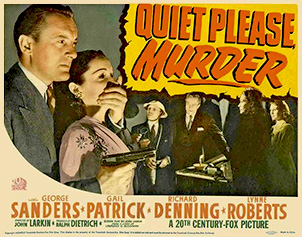 Fleg is a master counterfeiter of rare manuscripts. He steals the originals and makes flawless copies of them to sell to unsuspecting book collectors. His latest product is recreations of a 17th century manuscript of Hamlet, which he steals from the library in the film's opening scene. When the hapless library security guard tells Fleg he can take the manuscript "over my dead body," Sanders nonchalantly pulls a gun and shoots him. This is the level of subtlety we'll be on for the next 70 minutes.

Myra is Fleg's fencer, or something like that. Like Eve Harrington to Sanders' Addison De Witt in All About Eve, Myra and Fleg talk to each other "killer to killer." Perhaps she is the S in Fleg's S&M.  Myra has an offshoot plan of her own, which involves Richard Denning, Sidney Blackmer and the Nazis in ways I wish I had enough time to explain to you. It all comes to a head when everyone is locked in the library during an air raid drill. While the lights are out, all manner of double and triple crosses occur.

The film's choice of Hamlet as the stolen text is not an accident. The melancholy Dane once said "Conscience makes cowards of us all," and Fleg has a masterful speech about how one's conscience can be the ultimate saboteur for those in love with committing evil. Sanders delivers this speech with the gusto you expect from him, highlighting the theme that one's conscience may indeed be the ultimate femme fatale. 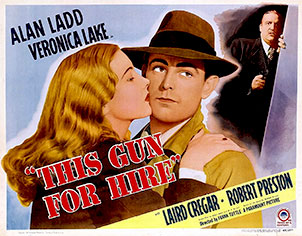 “And introducing Alan Ladd” screamed an onscreen credit for This Gun For Hire, marking the first pairing of Veronica Lake with the man who would be Shane. Of course, we denizens of Noir City need no introduction; Ladd’s been here before, most memorably in the 1949 adaptation of The Great Gatsby. This Gun For Hire also marks the return of another Noir City favorite, writer Graham Greene. Greene’s story of a professional hit man gets the Hollywood treatment, slapping Robert Preston’s good-guy cop in the role of protagonist. But the film also does something unusual for 1942: It makes Ladd into the kind of anti-hero more commonly found in features from later eras. There really is nothing new under the sun, folks.

Philip Raven (Ladd) is the kind of hit man who would shoot an innocent victim through a closed door then serve a saucer of milk to the mewling kitten who visits his window every day. When Raven is betrayed by his current employer, whose treasonous dealings include selling poison gas to the Japanese, he goes on the run. Since he’s been paid with marked bills that immediately flag him as a criminal, Raven has to procure money from another source. This leads to a Meet Cute only a pickpocket could love. Raven steals a sawbuck from the purse of Ellen Graham (Lake) while she’s in the powder room of the train they’re inhabiting. Graham calls him on it—she’s sharper than he thought—so he gives it back. The casual, smoldering way Graham asks “you wanna borrow a dollar?” afterwards is a prime example of the Ladd-Lake chemistry at work.

Alas, romance is off the table for these two. Graham is betrothed to Michael Crane (Robert Preston—yes, that guy from The Music Man). He’s the copper investigating Raven’s traitorous boss and his right hand man, Willard Gates (Laird Cregar, brilliant as a man who abhors violence but isn’t below committing it). Raven’s marked bills lead Crane to Raven, and when the latter makes the connection between his prosecutor and Graham, there’s trouble with a capital T in store for all involved.

To be honest, Preston is really no match for Ladd, a sentiment echoed by the audiences who demanded to see more of Ladd after this movie. While the film doesn’t side with him, it also doesn’t blunt the rare moments of vulnerability with which Ladd shades his performance. In fact, one can say that Raven’s own downfall has an air of tragic chivalry, a price paid by a man who knows the limits of his capacity to love, but recognizes the importance of that skill in someone else. There’s an unrequited romantic quid-pro-quo between Graham and Raven that’s—dare I say it—rather sweet. 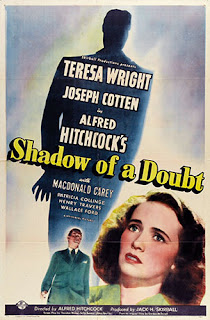 I played hooky from the Saturday evening showing of Hitchcock's classic Shadow of a Doubt, as I'd seen it recently on the big screen. But I've always imagined that if Hitchcock had allowed his tradmark cameos to come with dialogue, he would have been seen trading perfect murder scenarios with Hume Cronyn and Henry Travers. While these two banter amusingly back and forth, a real murderer is in their midst, Joseph Cotten's iconic Uncle Charlie. Uncle Charlie thinks he has committed the perfect murders of widowed women lonely enough to be charmed by him. He moves from widow to widow, with Hitchcock using "The Merry Widow Waltz" as Charlie's calling card.

Uncle Charlie has nothing but disdain for his victims, but his namesake niece, Charlie (Teresa Wright) has nothing but love for her uncle. That love morphs slowly into hate as she discovers Charlie's true nature, a nature Cotten barely hide in his tour-de-force dinner speech. Wright is excellent at showing the loss of her innocence. Shadow of a Doubt gives her and Cotten numerous scenes of scary antagonism. How does one cope with the knowledge that the person they most admired is unworthy of such worship? The adage that one should never meet their heroes applies in triplicate here in Noir City.

Next time: A cautionary tale starring Paul Lukas.
Posted by odienator at 8:22 PM