TIFF'14: Ruth and Alex: The Married Life of Fast Black And Annie Hall 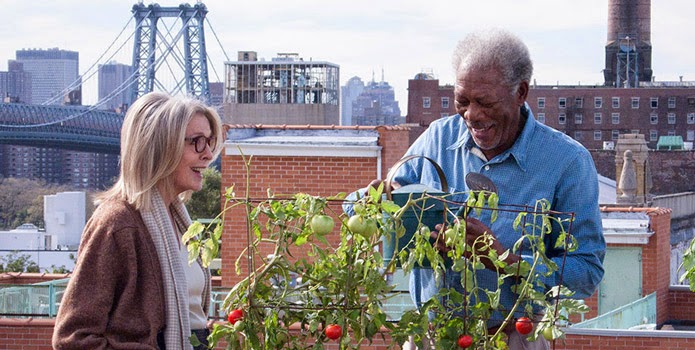 I do not mind a little emotional manipulation in my movies. In fact, I can handle more of it than most critics. But Good Lord! Even I had to wave the white flag of surrender at Ruth & Alex. Thanks to its leads, and the younger actors who play their characters in the past, Ruth & Alex is at times very effective. But one can only go to the emotional well so many times before it runs out of water and the bucket hits bottom. This movie's bucket busts right through the well and keeps going until it hits the Devil down in Hell upside the head.

Based on the book by Jill Ciment, director Richard Loncraine's latest stars Oscar-winning veterans Morgan Freeman and Diane Keaton as an old married couple looking to move from their Williamsburg walk-up for reasons that aren't completely clear. The walkup has so many stairs the family dog doesn't want to navigate them, and even their real estate agent niece (Cynthia Nixon) is exhausted after reaching the apartment. Ruth and Alex aren't getting any younger, so they start considering places that have an elevator.

(Aside: Since imDB lists her character as "niece" and I have forgotten what the movie calls her, I am henceforth referring to Nixon's character as "Miranda," because she is exactly like her Sex and the City character.)

Miranda offers to help her auntie and uncle sell the place they have inhabited for the past 40 years. With gentrification turning Williamsburg into a fashionable, trendy hellhole, I mean, hotspot, Miranda thinks she can get over a million dollars for the listing. We are then treated to an occasionally amusing series of prospective buyers who are all quirky though tolerable caricatures. Miranda refers to them by cutesy nicknames, as if this were a low-rent Rear Window. Artist Alex (Freeman) acts gruff while retired schoolteacher Ruth (Keaton) greets each increasingly warped apartment visitor.

So, we have a movie about a charismatic aging couple who stand to make a profit on a home they bought when their 'hood was unpopular. They relate, fight, make-up, and show incontrovertible affection for one another while navigating the exhausting NYC real estate market. Keaton and Freeman are good, as expected, and my brain warned me that "they probably won't even move at the end." This would make a fairly decent, perfectly acceptable movie.

But lo! I have barely scratched the surface on plot, emotional effects and predictable happenings! An itemized list:

1. This movie has narration. It's by Diane Keaton. Just kidding. Mr. Freeman occasionally narrates the story, and I was reminded of his first spoken words for a Clint Eastwood tribute: "Yes, it's me again," Freeman said on that narration track. This is incredibly lazy shorthand, a crutch way too many movies have leaned upon. But I love listening to Freeman's disembodied voice, and the narration is used sparingly, so I could live with it.

2. When not narrating, Alex reminisces about the decades he and Ruth spent in their apartment. This sends the film into flashback mode, where the younger actors (Claire van der Boom and Korey Jackson) do a better job playing Keaton and Freeman than Keaton and Freeman do. The flashbacks are mildly intrusive in how they're invoked, but they serve to enrich character development. To my pleasant surprise, the younger actors play scenes that address their interracial relationship and its hardships. van der Boom is especially good in a scene where her family makes her choose between her Black fiance and them. And these two generate a passionate, youthful heat that explains why their older counterparts are still together. Unlike the narration, these flashbacks are useful.

3. Alex keeps running into a precocious little girl (Sterling Jerins), both at the viewing for his house and when he and Ruth start viewing potential replacements. The young actress who plays her has several short, well-acted scenes with Freeman, and her glasses clearly evoke Keaton's, but nothing is done with her. She exists just to be a cute device of a little girl whose weird mother likes getting into other people's beds. Don't ask.

4. Remember Ruth and Alex's dog, the one with the aversion to stair climbing? It gets sick. Really sick, to the tune of $11,000 in vet bills. It needs surgery and may be paralyzed for life. It's a damn cute dog, too, and there are numerous scenes of the vet (Maury Ginsberg) calling to give Ruth suspenseful news about the dog. There are so many plot developments with the dog that the phone calls approach farce, and every time the film cuts to the dog, it hits you in the heart with a sledgehammer. A shot of the dog's bandaged paw reaching out to Ruth might cause your tear ducts to burst into flames. But come on, who can resist a doggie in distress?

5. The film sits Ruth and Alex on a bench near a famous New York City bridge in order to shamelessly, and repeatedly, invoke memories of Woody Allen's Manhattan. This is not a good idea.

6. Speaking of famous NYC bridges, there's a man of Arabic descent who has jacknifed a fuel truck on the Williamsburg Bridge before fleeing the scene. Every news outlet immediately refers to him as a terrorist, and throughout the film, news anchors hit that possibly incorrect note over and over because they has nothing else to go on. This plays as a scathing indictment of the garbage that passes for news on CNN, Fox News and the major networks, but does it really belong in this film? It is in the book, according to the author, but Ruth & Alex manages to trivialize it, especially after the suspect is erroneously accused of robbing a store. We spend so many scenes being shown TV footage of this unfolding story, yet the movie completely fails to do its outcome justice.

This may not sound overwhelmingly manipulative, but in any five minutes of Ruth & Alex, you'll find narration and/or a flashback and/or the sick doggie that's putting its owners into hock and/or the latest threatening news about the truck driver and/or the cute little girl and/or the Manhattan evocation. And I haven't even discussed the lesbian couple whose dog has a learning disability and who are adopting a kid from India and could REALLY use Ruth & Alex's apartment. Eventually, I found myself internally screaming "MAKE IT STOP! MAKE IT STOP!"
Posted by odienator at 2:41 AM