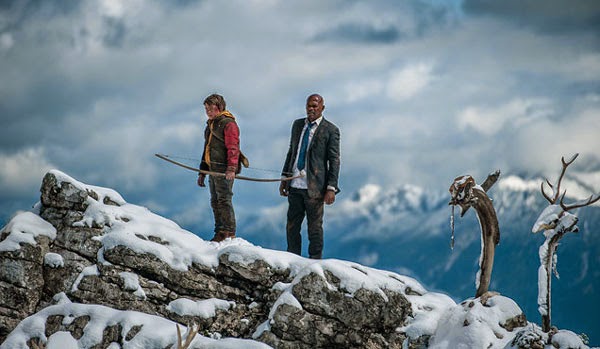 Big Game is a coming-of-age movie where the young man in question matures into an ‘80’s action movie hero. It features a 13-year old boy on a quest to prove his manhood, a quest that was supposed to involve big game hunting but evolves into a mad dash to save the President of the United States. Before the closing credits, this young man will execute feats of derring-do straight from the fantasies of a teenage boy in 1984. That Big Game makes this believable and cheer-inducing is one of its pleasures. Another pleasure is the casting and chemistry of its two leads, one of whom is the reliably profane Samuel L. Jackson.

Sam doesn’t play the kid. That role belongs to Onni Tommila, last seen in Big Game director Jalmari Helander’s Rare Exports. For such a young actor, Tommila is very good at bringing credibility to situations that the normal brain would register as preposterous. He has an underlying vulnerability that makes one believe the impossible things Helander has him do. In Rare Exports, Tommila found that Jolly Old St. Nicholas actually belongs on his own naughty list. In Big Game, the lack of faith his family and his village has in him completing his quest for manhood inspires him to leap off mountains onto a generator being carried by a helicopter.

Inside that generator is Samuel L. Jackson, but more on that later. Like the men before him in his village, Oskari (Tomilla) is being sent into the Finnish woods to prove himself by hunting big game. The villagers have no faith in Oskari; he’s weaker than the average 13-year old kid. “He won’t come back,” one man says. But Oskari’s father, a powerful man, pulls some strings to give his son the chance at honor and manhood. Armed with a bow and arrow he can barely shoot, and a map with a specially marked X from his Dad, Oskari heads into the woods in the hopes of snaring a bear as big as the one his dad once snared.

Also in the woods is a terrorist played by Mehmet Kutulus. Kutulus is a throwback to the days when movie villains just wanted to see the world burn. He’s a cinematic descendant of Die Hard’s Hans Gruber, right down to the perfectly trimmed beard. Armed with a missile capable of taking out a jet plane, he waits for his target to do a fly by. To pass the time, Kutulus tests his airplane missile on the pilot unfortunate enough to have flown the villain to the current location. The test is successful.

Meanwhile, President Oba—I mean Sam Jackson--flies high above Oskari’s woods en route to Helsinki. When Kutulus’ missiles register on Air Force One’s radar, Jackson’s top Secret Service agent, Morris (Ray Stevenson) forces the president into an escape pod and ejects him from Air Force One. Morris sends a team of soldiers to assist the President, though he conveniently forgets to tell them their parachutes don’t work. Morris jumps from the crashing Air Force One soonafter, with plans to rendezvous with Kutulus.

Oskari sees Air Force One plummeting to the ground, giving him his first opportunity to outrun metallic carnage and fireballs. Finding the President’s pod nearby, Oskari releases him. “What planet are you from?” Oskari asks, before introducing himself to the leader of the free world. President Jackson immediately tries to commandeer Oskari’s scooter. “This is now property of the United States government!” he exclaims. “This is my forest,” Oskari replies, reminding the President that he is way out of his geographical element. “You will not survive without me.”

Back in Washington, CIA agent Felicity Huffman, vice president Victor Garber and terrorism expert Jim Broadbent wonder what the hell happened to the President. Their scenes are set in a command center that feels about as real and as accurate as Dr. Strangelove’s famous War Room. Broadbent, sporting a credible though unplaceable American accent, delivers the kind of deliciously hammy performance for which his fellow Brits are known. He seems to have predicted exactly what happened to the Commander-in-Chief, which no one onscreen finds suspicious even after he’s proven correct.

The hidden treasure Oskari’s dad left for him turns out to be the aforementioned generator. Inside it is an already killed animal, proof that his dad shares the villagers' belief that he's too weak to succeed on his own. But disappointment turns into determination, especially after Kutulus and Morris show up to shove the President into that generator. Sensing that his honor depends on returning the President to his father alive and in good shape, Oskari starts taking pages from the Stallone/Schwarzenneger playbook. Morris and Kutulus are more than happy to try and kill Oskari with extreme prejudice, but as any parent will tell you, it’s damn hard to keep a determined teenager from trying to rebel.

For a change, the bad motherfucker here is not Jackson. In fact, Sam gets his ass kicked repeatedly in this movie. The Black President gets beaten up so many times it almost feels like we’re trapped in a Republican’s wet dream. This gives Oskari ample opportunity to be heroic. His speech in Finnish before leaping off a cliff to save Sam is more rousing than anything Rambo ever said (and like Rambo’s dialogue, it needs subtitles). Big Game is Oskari’s show, but lovers of ass-kicking Sam and his favorite 12-lettered best friend need not be disappointed; both eventually show up in a well-timed crowd-pleasing moment of pure bliss.

Screenwriters Helander and Petri Jokiranta have all their bases covered. They manage to seal or obscure the biggest plot holes, and even offer a dénouement most American films wouldn’t dare consider. Despite the guaranteed (and unwarranted, despite the profanity) R-rating this will get from the MPAA, Big Game will play like gangbusters for teenagers who feel as undervalued and underestimated as Oskari. It’s silly as hell, to be sure, but dammit, I had a good time cheering as its hero earned his stripes.
Posted by odienator at 12:22 AM