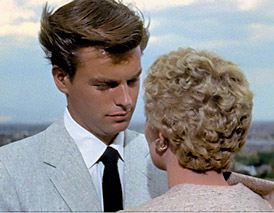 1956 came to Noir City in screaming Technicolor on Wednesday night. The final film in what I'll call the Deadly Kiss trio played to rousing effect. Tuesday night's double-bill started the trend of titles with smooches in them, with Kubrick's Killer's Kiss and Aldrich's Kiss Me Deadly roughing up the audiences at the Castro Theatre. I'm gonna do a reverse Wizard of Oz here and start with the more recently seen color film before going back to Tuesday's black and white ones. Because the only thing more murderous than femme fatale kisses is Father Time's assault on my short-term memory. 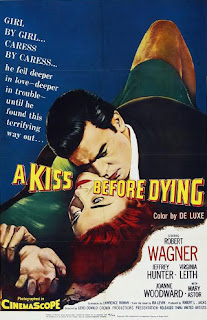 Robert Wagner is probably best known to millenials for his work in Austin Powers. For my generation, he's one half of Hart to Hart. But in my Mama's time, he was a suave matinee idol who could have probably coasted by on those credentials well into old age. Alas, the sirens of noir beckoned him (with an assist from Darryl Zanuck) to turn to the dark side. Zanuck brought the rights to Ira Levin's first novel as a vehicle for Wagner and other Fox contract stars. When the film was ultimately made by Crown Pictures, Zanuck loaned out Wagner and his co-stars, presumably because he knew the result would be this deliriously lurid and mean version of A Kiss Before Dying. This version precedes the 1991 Sean Yong/Matt Dillon remake that's so bad it makes that 1988 version of D.O.A. directed by Max Headroom's creators look like Citizen Kane.

Bob Wagner plays an awful, awful, awful sociopath named Bud Corliss. He's 25, in college and dating Dorothy Kingship (Joanne Woodward), whom he has not-so-conveniently knocked up. Of course, you conldn't say "knocked up" in a movie back then, nor could you say "pregnant" or else the censors would freak out. ("I guess they still believed in the stork back then," said Eddie Muller in his introduction.)  Lawrence Roman's adaptation not only enraged the censors by having Woodward utter the word, the screenplay also has Corliss pushing her off a 12-story building to her death. I bet the language-policing censors didn't have a problem with that.

Before he resorted to brute force, Corliss tried poisoning with arsenic the gal he chriestened "Dory." Director Gerd Oswald masterfully directs the suspenseful sequence where Corliss outwits a locked chemical closet's door and an absent-minded chemistry student. Oswald also handles the plot's surprises with gasp-inducing panache. The scene where Corliss discovers that Dory tolerates arsenic better than any other allegedly poisoned human being was as shocking to the audience as it was to the attempted murderer. Wagner's reaction alone is worth the price of admission.

Since Corliss has already mailed to Dory's sister a "suicide note" written unbeknownst by Dory under the guise of a Spanish language translation, he has to kill Dory before the letter arrives. What happens next is surprisingly vicious for 1956, though, to be honest, we'd seen some rather extreme censor-defying displays in Kiss Me Deadly here in Noir City the night before. Dory is so gullible and so in love with this heel that she never sees her demise coming. Woodward is on record saying she thought this was her worst picture, and though I think the movie is very good for the most part, I found her character to be as aggravatingly naive as Carol Marsh's character was in Brighton Rock. "Woman, don't you have eyes?!" I wanted to yell at the screen as Dory swooned over Bud's callousness.

Speaking of being naive, Corliss' Mom is played by Oscar-winning vet (and former femme fatale) Mary Astor. Astor sports a short hairdo that's as daring as Mia Farrow's in that other great Ira Levin adaptation, Rosemary's Baby. Mama Corliss is also absolutely clueless about her son's penchant for evil, though he insults her at every turn and even shames her fashion sense when she shows up for a rich family's party. That party is being thrown by Dory's dad, who has no idea that Corliss killed his daughter. He does know that Corliss is about to ask his other daughter, Ellen (Virginia Leith) to marry him. That's right, Corliss wants to get his hands on that Kingship fortune so much that he's now dating the sister of his former fiancee.

I told you this guy was a real [CENSORED BY THE 1956 BREEN OFFICE]!

Jeffrey Hunter shows up as a classmate of Dorothy and Bud. Hunter would later play the Son of God in Nicholas Ray's Rock Me, Sexy Jesus, I mean King of Kings. Here, his son of a homicide detective character looks a lot like Clark Kent. Ellen is far tougher than her sister--she pieces together that Dory's death may not have been suicide--and her slow realization of the true nature of the man she loves has some delicious Hitchcockian undertones.

A Kiss Before Dying is our only blast of color so far, presented to us on 35mm and in that format that makes the Castro Theatre screen's curtains open REEEEEEALLLL wide (aka Cinemascope here). When evil Bud finally got his, the audience's response was as loud as the film's color scheme. 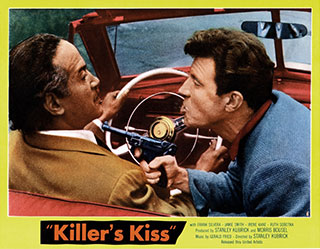 You may think me as big a heel as Bud Corliss for saying this, but I am not a Stanley Kubrick stan. Granted, Dr. Strangelove is currently #6 on my all time best movies list and I'm a diehard fan of The Killing (which I covered at Noir City XV) and Barry Lyndon. But I've probably disliked as many of his films as I've liked. I consider Killer's Kiss one of the latter; it's a movie that looks like a pages of newspaper photos come to life. Your hands would smudge the screen if you touched it. This peril-filled tale of a boxer and his mobster's moll girlfriend was made by Kubrick after he obtained a $75,000 loan. He shot it in his hometown of NYC (probably the last time he ever shot there) and didn't bother to sync the sound, opting instead to do what we'd eventually come to expect from Kubrick, i.e., shoot miles and miles of footage.

Killer's Kiss is a great origin story for Kubrick. You can see his style being born right before your eyes. The story takes a backseat and lets the visuals and the editing drive the car. Kubrick wrote, edited and directed, and he gets good performances from his cast, though again, this is a picture that's more concerned with the mood it evokes than its narrative. Setting a dangerous mood is always welcome here in Noir City. 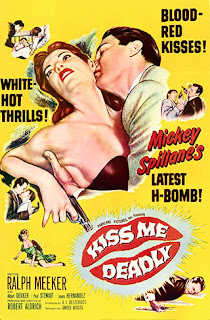 I've covered the brutal, rough and unapologetically bleak Mike Hammer movie Kiss Me Deadly elsewhere, so just a few brief words. Ralph Meeker's Hammer could give Wagner's Bud Corliss a run for his money in the heel department--and he's the HERO! Such anti-heroes rarely come better than this, though I admit Mike Hammer has never really grown on me, not even in his Stacy Keach TV adaptation or in the supremely nasty Larry Cohen-scripted iteration of I, the Jury, which was my introduction to the character. Eagle-eyed readers will look at the poster above and see where the Noir City poster designers got their ideas.

The movie that put Robert Aldrich on the map was supposed to be presented at Noir City in its truncated format (suitcase opens, KABLOOEY, everybody dies, yay! Apocalypse, cue Quentin Tarantino homage machine!). Instead, it was shown with the restored 1997 ending (according to Eddie's introduction of Killer's Kiss--I missed the Kiss Me Deadly screening). In that version, Mike Hammer lives to brutalize another day, angering all those censors and the Catholic Legion of Decency and whoever else had pearls to clutch in 1955. Only in Noir City can we be presented with "a happy ending" and have that deemed a mistake. We wouldn't have it any other way.

Next up: Holy Curtiz! Is that Elaine Stritch?!!
Last time: Noir City XVII #4: The Absent-Minded Confessor

Posted by odienator at 7:17 PM