Noir City XVII #2: The Monsters Are Still Due on Maple Street 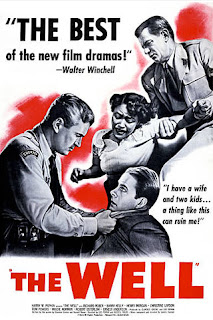 By 1951, film noir had at least one major entry that commented on race and featured a race riot. Joe Mankiewicz’s other 1950 film, No Way Out, marked the debut of Sidney Poitier as a doctor who has to deal with racism from patient Richard Widmark. It’s a jarring entry in Poitier’s studio system oeuvre, one where he gets to be angry and defiant without any Stanley Kramer sugar-coating. His last line in the film is as ice cold a kiss-off as noir has ever seen. Plus, there’s the aforementioned race riot where—and this is a bold as hell choice by Mankiewicz and his co-writer Lesser Samuels—the Black folks win.

Noir City isn’t showing No Way Out this year, but it is showing Sidney’s best bud, Harry Belafonte’s Robert Wise-helmed Odds Against Tomorrow, another pitch-black arrow in film noir’s quiver. And on Saturday afternoon, the top half of the matinee housed one of the harshest noirs I’ve seen at this festival. In fact, Saturday’s lineup was so intense that I had to cut and run after three of the four features screened. (Don’t worry! I’d seen Angel Face before and I hope Bob Mitchum will forgive me for being such a wuss. Otto Preminger certainly wouldn’t!)

Re: that first entry on the matinee bill: The Well is a rarely screened, double Oscar nominee (screenplay and editing) from director Russell Rouse and his co-screenwriter Clarence Greene. This duo, along with their producers, the Popkin brothers, liked to add gimmicky hooks to conventional stories. By the time this screenplay was written, 1951 had already had its own real-life Baby Jessica-style story about a child trapped in a well. This gave Greene an idea for his gimmick, but just the mere notion of a kid stuck in a well wouldn’t have much traction. After all, isn’t that what Lassie was barking about every week on her show? So Greene decided to really give Lassie something to yap about: The trapped kid in this story is a little Black girl, the daughter of the Crawfords (Ernest Anderson and Maidie Norman). 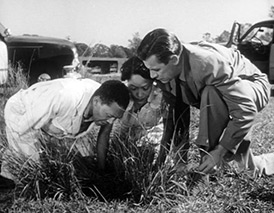 Keep in mind that this is 1951, when the country was still deeply and comfortably under the wingspan of Jim Crow. Rouse and Greene are shockingly frank about the subject matter here, both in language (which is as rough as you’d expect) and in viewpoint. This takes place in a town where it seems that the neighbors are living in harmony despite the unequal tenor of America’s views on race. But in reality, this place sits atop an unstable powder keg of racial tension. Interracial allegiances that appeared airtight could shatter in an instant with one misunderstanding.

That misunderstanding arrives with the arrest of an outsider named Claude Packard (the always welcome, ubiquitous citizen of noir movies, Harry Morgan), who is immediately blamed for the Crawford girl’s disappearance. He was last seen buying her some flowers and walking with her on a main street in town. Several witnesses, including a classmate, corroborate the details and even pick Packard out of a lineup. Packard maintains his innocence while also citing that he’s the nephew of the most powerful man in town, construction magnate Sam Packard (Barry Kelly).

Unlike the townspeople, viewers know that Claude is innocent; in the opening scene, we see the Crawford girl fall into a well hidden in a meadow not too far from her home. But suspicion of strangers is characteristic of small towns where all the residents know each other, so rumors of death spread in both the White and the Black parts of town. Sam Packard makes matters worse--even he thinks his nephew may be guilty of murder yet he has a reputation to uphold. Sam throws around his power, offering Claude an alibi he refuses to take. Though Sheriff Ben Kellog (Richard Rober) is unimpressed and continues to hold Claude, the Crawford family senses a cover-up.

When Mr. Crawford (Ernest Anderson) confronts Sam and Sam is unintentionally injured, White townspeople see it as breach of etiquette and vow to strike back “to put those people back in their place.” Black members of the town sense yet another cover-up that will deny them justice and also plan retaliation. The town simmers toward its boiling point. Meanwhile, residents play a ferocious game of Telephone, with the stories getting more and more elaborately false and dangerous as the information gets passed on. Numerous scenes of race-based violence follow, ratcheting up the tension to unbearable levels.

For a film made in 1951, The Well is surprisingly even-handed, never downplaying the anger of its Black characters nor ignoring their pain. Maidie Norman has a quiet, heartbreaking power as the worried mother. She figures prominently in the film’s tensely edited, gut-wrenching climax. Mrs. Crawford is allowed to be as memorable as Sheriff Kellog or the feisty waitress who isn’t above bashing in a head or two with her skillet in order to protect her Black cook from angry White rioters.

As if tipping its hat to Lassie, The Well has a dog hero who tells its owner about the kid trapped in the well. Thankfully, this news travels as fast as the falsehoods did, and the town bands together to save one of its own, regardless of her color. This turn of events will play as rather corny to the cynical viewer, but I found myself so wrapped up in the story that I bought into its hopeful conclusion.

The tagline of Noir City is "there are no happy endings." I was relieved that this was the exception. But I won’t lie—this film, with its racial slurs and its agonized scenes of violence and cruelty--ran me through the ringer and weighed heavily on me for the rest of the day.

Next up: The other two movies on this tough Saturday—and a little bit of Thelma Ritter.
Last time: Noir City XVII #1: Treasury of the Sierra Madre