Noir City XIV #5: The Lurid Confessions of a Professional Virgin


Our good buddy Oscar Levant once said of Doris Day, "I knew her before she was a virgin." Noir City sought to introduce us to the sinner before the saint with two musical noirs designed to make us swing and sway with Doris Day. Long before she teamed up with Rock Hudson for the prudish films that remain her most well known legacy, Ms. Day was a much harder dame on the big screen. She stood up to Jimmy Cagney in full on gangster mode, for cripe's sake!! Pre-virgin Doris Day's Pillow Talk would have made Plymouth Rock land on Rock Hudson.

Our night with Doris Day began with 1955's Love Me Or Leave Me, the biopic of one of the most famous singers of the1920's and 1930's, Ruth Etting. Of Day's turn, Etting noted that Day played her tougher than she actually was. Indeed, there were moments in the double feature when it appeared Doris might star in "With Six You Get Your Ass Kicked." In both films, she holds her own against some of the toughest persona to grace the screen, Lauren Bacall and Kirk Douglas among them.

Love Me or Leave Me fits neatly into the biopic genre, but with one unusual difference. With all the principals selling their stories to MGM at the same time, you'd think today's stickler for facts audiences would find plenty to squeal about in terms of dramatic license. But for the most part, Love Me or Leave Me sticks to the facts. It does soften its big climactic moments, but trust me, that's a blessing in disguise.

Etting's story features a lustful piano player Johnny Alderman (Cameron Mitchell) and a Chicago mobster named Martin Snyder (Cagney, of course) who takes Truffaut's 1960 film title Shoot the Piano Player quite literally. Snyder does it for love, of course, and Cagney gives a rich, complicated performance that, on the surface, threatens to turn into the imaginary Doris Day vehicle Please Don't Eat the Scenery. What's most interesting about Cagney's take here, and it's an Oscar nominated performance, is how he portrays a man of a different era who knows his kinda guy is going out of fashion. The more sensitive, less gregarious Alderman is the replacement vehicle. He says as much to Snyder during one of their numerous confrontations. I'm from the same place you are, he basically tells Snyder, but unlike Snyder, Alderman has evolved.

Snyder's last desperate act is a grasp for the final strands of a foregone era, one in which he was king of the hill. It's a very noirish thread running through what's essentially a musical. Credit goes to Cagney and his director, Charles Vidor, for precariously keeping this balance.


The opening credits for this film list numerous songs that Etting made into hits, all of which will be performed by Day at one point or another. They save the title song for last, and by the time Etting swings it, you feel she's earned every lyric. Day is excellent here; we knew she could sing, but her tough dame act may have come as a surprise to many. Why Day wasn't swept up in the Oscar nominations Love Me or Leave Me received is beyond me. She's as deserving as Cagney and screenwriter Daniel Fuchs, who won the Oscar for Best Story for this film. 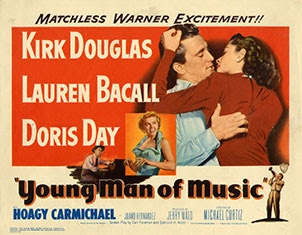 Pssst! Hey you! C'mere! You wanna see a movie where Lauren "Baby" Bacall is a bisexual who hunts both men and women with equally reckless abandon? Well, you've come to the right place! 1950's Young Man With a Horn finds Betty Bacall waging war for the heart and mind of Kirk Douglas' Rick Martin. Ricky is livin' la vida loca, torn between Betty, Doris Day and a bugle. Of course, Martin picks the trumpet, but he'll learn the hard lesson that's befallen many musicians before and since: These Horns Ain't Loyal!

Day sings here too, and she gives a good performance as a much nicer gal than she was as Ruth Etting. But she still has an edge to her. Douglas is perfectly cast, because nobody gives anguished artist vibe better than Michael Douglas' Da. And the legendary songwriter Hoagy Carmichael shows up in a rare acting role as Martin's right hand man (he is kind of the Levant role from Sunday's Humoresque. But I'd like to put in a few words for another actor who isn't listed on the poster.

The great African-American actor Juano Hernandez shows up yet again in Noir City, and as he did in The Breaking Point, The Pawnbroker, Intruder in the Dust and so many other films, Hernandez fills the screen with a richly drawn characterization of a minority. As Art Hazzard, Martin's trumpet-playing mentor, Hernandez is his usual brand of spectacular, strong one minute, and heartbreaking the next. Like Cagney's Snyder, he too is a relic of an era gone by, about to be replaced by a younger, sexier model. But this one is of Hazzard's own design; Douglas' Martin looks at him with a mixture of student/teacher and father/son love. Hazzard is Martin's idol, which makes their final scene together that much more heartbreaking. Please, please, please seek out more of Hernandez's work, people!

The smaller crowd at Noir City's Doris Day night indicated that folks didn't know about the past cinematic lives of our date for the evening. It's their loss. Que Sera Sera!

Next time: British Noirs and WTF Was THAT?!
Posted by odienator at 5:47 PM