Noir City XIV #4: Suffer for Your Art, Pay For Your Sins 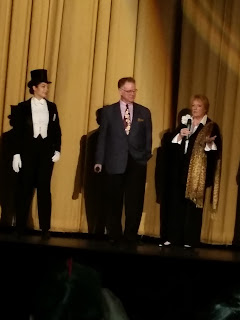 Miss Noir City 2016, the Czar of Noir and the daughter of Paul Henreid


For a few nights, Noir City's onscreen celebrity roster looked like the wrap party for Casablanca. Humphrey Bogart was there, represented by two distinctly different pictures, and Claude Rains was "shocked! shocked!" to find himself in the same picture with Victor Lazlo himself, Paul Henreid. Truth be told, Sunday and Monday offered up some of the best bullets in Jack Warner's actor arsenal. In addition to the aforementioned gents, we were privy to the onscreen delights of Miss Bette Davis and Miss Joan Crawford. They shared Sunday's classical music movie double bill, and I'm sure the ghosts of either of them didn't like it one damn bit!

1946's Deception should have been called The New Adventures of Old Christine. Christine Radcliffe starts a new life with her old lover Karel Novak (Paul Henreid), the classically trained cellist she thought had perished in the Holocaust. Their tearful reunion kicks off director Irving Rapper's music-filled melodrama. Christine is so happy to see Karel that she doesn't tell him she's been keeping time with Claude Rains' hot-headed composer Alexander Hollenius (the names in this movie are to die for--Alexander Hollenius?!).

As luck would have it, Hollenius needs a cellist for his latest masterwork, and Karel needs a job. Unfortunately, Hollenius isn't going to sit around fiddling with his conductor's baton while his lady cavorts with her old flame. He wants her to suffer, and suffer good for not revealing the truth about their relationship to Karel.

Hollenius is a master manipulator, controlling the tempo of Karel's anxiety the way Leopold Stokowski worked his orchestra. Providing the sumptuous classical score for this sometimes maddening tale of secrets and lies is the legendary Erich Wolfgang Korngold. Korngold famously upstaged Errol Flynn in The Adventures of Robin Hood, but even he can't get the better of Claude Rains' magnificent, over-the-top portrayal of a composer consumed by anger and desire.

Bette Davis may have top billing, but even Paul Heinreid's daughter, Monika (who introduced the film and who has a book on her dad coming out soon) conceded that Deception belonged to Rains. This is one of his finest performances, and I wish the Academy had revoked his Oscar nod for Mr. Skeffington (a movie I find terminally boring) and given him one for this movie. Paul Henreid is no slouch here, either--it's really these two gentlemen's show with a muted yet effective Bette providing the catalyst for their fireworks. But she does get the one big moment we denizens of Noir City live for whenever Bette Davis appears on the screen. Nobody pulls a gun like Bette Davis, and Deception doesn't disappoint on that score.

Here's a great trifecta for you: John Garfield, Oscar Levant, and Joan Crawford. They are pressed into service by the unlikely team of playwright Clifford Odets and Imitation of Life scribe Fannie Hurst. Odets adapts Hurst's story of Frank Boray (Garfield), a poor New York boy whose violin took him from poverty to prosperity, and the lonely married woman who falls head over heels for him. Keeping things from sinking too deeply into the mushy romantic quicksand is brilliant wit and musician Oscar Levant, whose every line in this picture should be embroidered on pillows and sold to the highest bidder.

Levant plays Frank Boray's musical mentor and friend, a role that we'll see more than once here at Noir City XIV. As a boy, Boray's obsession with the violin pisses off his dad but amused and pleased his mother. She emotionally supports her son well up into his adulthood, but Mama Boray also doesn't take any mess. She throws some major shade to Crawford's Helen Wright, the hungry woman Mama feels is a dangerous distraction to her son. And she's got a point; Boray is too immensely talented to be sidetracked. Several scenes of classical music numbers, all done to completion, may prove Mama correct.

Garfield's fakery of the violin is as astonishing as his excellent performance, but Humoresque, in a bittersweet way, belongs to Joan Crawford. Fresh off her Oscar for Mildred Pierce, Crawford exposes a vulnerability that blows away one's usual thoughts when considering a Joan Crawford performance. She digs deeply here, as deeply as I've ever seen her go, and the resulting emotional outpouring is quite effective. Her distracting, extreme hairdo looks hard enough to deflect beer bottles, but the heart on her sleeve beats too loudly to ignore.


That painting of my favorite actress, Barbara Stanwyck, is a major spoiler for 1947's The Two Mrs. Carrolls, but don't let that stop you from watching this highly enjoyable hot mess, a film its leading man, Humphrey Bogart, really hated. On a double bill with Bogart and Nicholas Ray's fantastic In a Lonely Place (which I've written about elsewhere), The Two Mrs. Carrolls offered an amusing cool down after the workout we got from Bogie and Gloria Grahame in Ray's masterpiece.

Bogie plays a painter holed up in the woods working on his art. It's a role you don't buy for a second, but I would have played a ham on rye sitting in an Automat window for 2 weeks straight if it meant I got to act with Barbara Stanwyck. So I don't begrudge Bogie one bit. Bogie's married painter tries to win Stany over, but she's not having it at first. When Bogie's wife mysteriously dies, Stanwyck becomes that second Mrs. Carroll.

This movie should have been called "Bogie Goes Batshit". And no, not the Captain Queeg kind of batshit, or the Dixon Steele kind of batshit--those performances are anchored in deep psychological misery. Mr.. Carroll is straight up looney tunes, and Bogie's horror movie-style entrance through a broken window (you'll wonder how he got there in the first place) is almost worth the price of admission.

Definitely worth the price of admission is Ann Carter's performance as Bogie's daughter. She's only 11, but she speaks as if she were a 40 year old Victorian era spinster. It's to Carter's credit that she sells every single precisely pronounced and presented line of dialogue, but I couldn't stop laughing at how prematurely grown she sounded. This was clearly the Dakota Fanning role of 1947. I guess everyone grows up way too soon when they're living in Noir City.

Next time: A WTF British movie and Doris Day, before she was a virgin.
Posted by odienator at 7:55 PM