Flippin' The Birds With Hitch 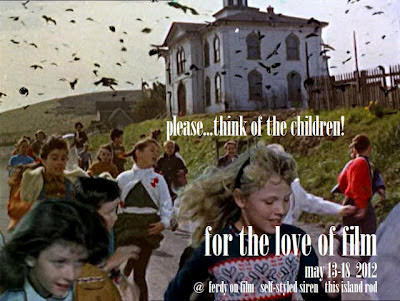 My introduction to Alfred Hitchcock came courtesy of two PIX’s: The Pix Theater in Jersey City and WPIX-11 on my VHF dial. The Pix Theater is where I saw the only Hitchcock movie I saw in first run, Family Plot. WPIX is where I saw my favorite Hitchcock movie for the first time, and a few of his more respectable ones as well. Both events occurred around age 6. Since then, Hitchcock has been a part of my life. My obsession with the Master of Suspense led me to view every available film of his, his television show (both incarnations), and to read the superb book-long interview with François Truffaut. The For The Love Of Film Blog-a-Thon, for which I am writing this piece, is looking to raise money so that I may continue my obsession with Hitch—the monies donated will allow streaming of the first known film Hitchcock was associated with, Graham Cutts’ The White Shadow.

Now I truly hate when bloggers ask for money, but I’m coming to you today with my hat out, begging like Mr. Wendal from that Arrested Development song. Look a bruva out and click at the bottom of this entry. Or click here. Toss a few bucks. Do it for Hitch. Don’t make me have to star in a real-life To Catch A Thief so I can get my fix.

Speaking of thieves, Family Plot is about one played by William Devane. The only thing I remember from my first viewing was a car chase. It would take a viewing on WPIX years later to fill in the blanks. By this time, my cinematic education allowed me to make a connection between my second favorite director’s last movie, and an earlier one by my favorite director: Hitchcock’s kidnapper demands the ransom be hidden in the same location Billy Wilder’s drunk hid his booze. I have NYC television to thank for allowing these connections, and for my introduction to so much of the old cinema I love. I had so fewer channels at that age than a kid nowadays, yet my cinematic horizons were broadened exponentially more than any contemporary viewer. All they have is Turner Classic Movies; every independent channel in NYC was Turner Classic Movies to us.

But I digress. Lesser Hitchcock or not, Family Plot is a good movie, one I enjoyed and would like to revisit. However, it had little effect on me as a six year old. Plot’s lead, Barbara Harris, would be far more effective that same year when she switched personalities with Jodie Foster in Disney’s Freaky Friday. A different Hitchcock actress would penetrate my Afro and embed her film into my memory. All she had to do was get half-eaten by a bunch of flying shithouses. 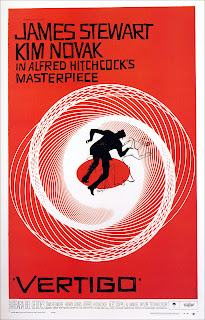 When asked for my favorite Hitchcock, I usually say Vertigo. This is a lie. Vertigo is Hitchcock’s best movie, to be sure, but it is not my favorite. Vertigo is the “critically correct” thing for me to say, but let’s face it: I grew to love Vertigo the way I grew to love jazz. No such evolution of my maturity was required to love The Birds. It bypassed adult-level explanation and went straight for the eyes.  WPIX played it a million times in my youth, and it never ceased to scare the everlasting gobstopper shit out of my younger incarnation whenever he watched it. I can attribute that fear to one shot in the picture—a broken pair of glasses.

I was weaned on horror movies. Both my parents love them, as do my siblings. At the time I encountered The Birds, however, a few things were still sacred in my horror viewing experience. For example, horror movies never went after kids. Not even the badass kids like Bill Mumy on The Twilight Zone. The giant ants in Them! didn’t eat kids. Neither did The Blob. And though pig-tailed, murderous wench Patty McCormack got struck by lightning, she had it coming, so I was fine with that. The Birds was the first time I saw helpless little kids attacked by forces beyond their control. Watching the scene now, I’m surprised how scared I was by it; its build up is far more terrifying than its execution. But as a kid, I thought Hitchcock played dirty. I was disturbed by shots of crows nibbling on tender, exposed kiddie flesh not unlike my own, but when that shot of the broken glasses appeared, I became almost inconsolably terrified.

Because I wore glasses. 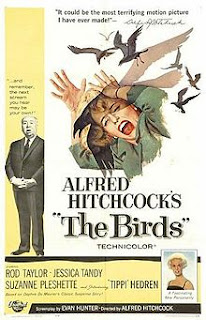 I got a 30 year respite from glasses wearing when I switched to contacts at age 11, but I am now permanently re-enslaved by my Transitions. I see fairly well without them nowadays—the loss of an eye seems to have sharpened my vision—but as a kid, I was blind as a bat without them. It was bad enough to be rendered practically helpless because I couldn’t outrun a flying instrument of destruction. Without the gift of sight, I would have been rendered completely helpless. Those birds would have eaten my blind ass up, then Tippi Hedren would have spat on my carcass for all the bad reviews I wrote about her daughter’s movies.

Poor Veronica Cartwright! She’s been through bird attacks, aliens bursting out of ribcages, and demonic possession by cherry pit or whatever the fuck it was she threw up in The Witches of Eastwick. As the owner of the shattered spectacles in The Birds, she endures all manner of horrors. Closer to my age than anyone else in the main cast, I identified with her. As I grew older, I found myself identifying with Tippi Hedren, the outsider whose presence the close-minded Bodega Bay townsfolk (correctly) believe has brought about the avian Apocalypse. No matter where I go, I feel like an outsider and wacko things happen. If I put on a green dress, I am sure birds would take over the world.

Regardless of what age I’ve watched The Birds, Hitchcock’s masterful setup of the kid-attack sequence never ceases to amaze me. It deserves mention in the same breath as Psycho’s shower or North By Northwest’s crop duster. The Birds is famously cited for having no musical score, but there is a musical number of sorts. As Hedren’s Melanie sits outside smoking a cigarette, the schoolchildren in Suzanne Pleshette’s class sing some childhood ditty a capella. I was always lulled into paying attention to what they were singing—the lack of music makes it creepy—and therefore was distracted  by Hitchcock as Melanie is. The scene seems to go on longer than comfortably necessary, which makes Hitch’s pan to the shitload of birds on the playground bars all the more shocking. To this day, that shot is more of a spine-tingler for me than even Mrs. Bates pulling back that shower curtain. 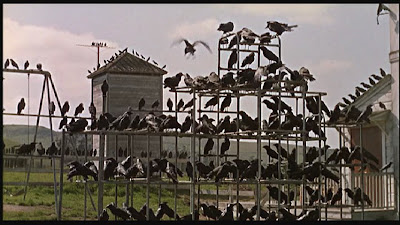 When I first visited Sonoma County in 2004, my host took me up to Bodega Bay, the town depicted in The Birds. I admit I did not want to be there, and as luck would have it, this was a day my contacts were not cooperating. So I wore my glasses. I kid you not, without warning, some crazy ass bird flew so close to my head I had to duck. “What the hell was that?!!” my host yelled. I couldn’t answer him; I was running like Jesse Owens on crack, holding my glasses and swatting the air. Somewhere in the great beyond, Hitchcock was standing, birds in hand, laughing maniacally. 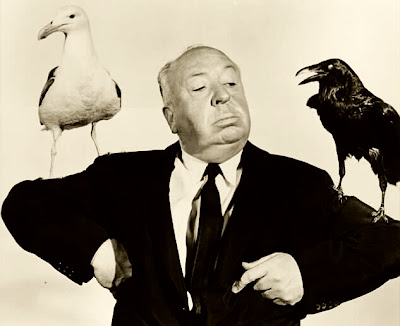 "Which one of you wants to eat Odie for not liking Rear Window?"

Folks, don't forget! Please donate to our cause! As an added incentive, here's the piece I wrote on Alfred Hitchcock Presents.

Posted by odienator at 7:29 PM

True story from my utes..

Early teener me was so terrified of the Birds I had to go pee. Grateful, I escaped to the El Cajon (there was only the one) theater restroom.

Once safe there, darnit, little me was still too tense to release, um, the thing.

For years and years afterwards I always dreaded a 2nd shy bladder incident while out to a show.

Odie - This is so awesome I'm nearly speechless. Nearly. I have to thank you for being a part of the blogathon and painting a vivid picture of youthful terror. I always held The Birds as my favorite, and Vertigo as most masterful - though it really is my favorite now. It's amazing how Hitch does that to people - a film for every season of life. Thanks, again.

Marilyn, thanks for the comments. This was and is a worthy cause. I'm all for film restoration, even of films I wouldn't want to see. Of course, I'd love to see The White Shadow--I hear it's crazy!

Unknown, The Birds broke your bird!!