One of the greatest by-products of attending a film festival is meeting people who share your love of the cinema. I’ve been to several well-known cinematic gatherings—Toronto, New York, Tribeca, SXSW, Bath—and along with the Film Noir Foundation’s Noir City Festival, EbertFest provides the most intimate settings by which to meet and get to know your fellow film fanatic. EbertFest is apparently habit-forming as well; you run into the same folks year after year. I was happy to see people with whom I spent numerous hours of debate and discussion last year return. Our conversations picked up where we’d left them the year before.

To promote such camaraderie, the Ebert Club hosts a meet and greet with the FFC’s and the Demanders every year. This year was looser than last, but it still afforded the opportunity to meet not only readers of rogerebert.com but some of the new Far-Flung Correspondents and my own Demander brethren. We come from different corners of the world, and I enjoyed discussing my eventual mastery of understanding the Brummie accent with FFC Scott Jordan Harris, and my ballroom dance training with fellow Demander Jana Monji. Most importantly, I finally got to meet the elusive Jim Emerson. Jim put a body to the voice that called me the night before, and soothed my fears that he might be an AS/400 computer rather than an actual human being. The idea is not as strange as it sounds: I’m a computer programmer. It wouldn’t be the first time I’ve spent years unknowingly talking to an IBM product. 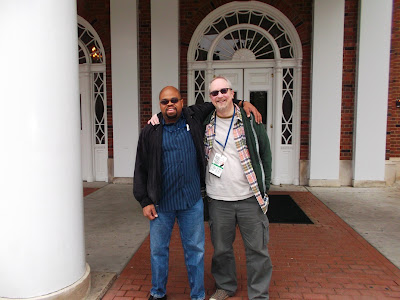 Rise of the Planet of the Far-Flung Correspondents

A highlight of last year’s EbertFest was the Far-Flung Correspondents’ panel. Led, as it was this year, by the always hilarious and very intimidating Professor Omer Mozaffar, the FFC’s discussed the cinema in their hometowns, with Turkey’s own Ali Arikan using his sinful accent to steal the show. This year, Ali’s accent was in traction from overuse, so he was unavailable to attend. The FFC panel was still a must-see, with plenty of humor, movie piracy and camaraderie to go around. I hope the FBI and the MPAA weren’t watching!

The FFC panel is so popular it usually gets the coveted, primo Friday at 10:30 AM spot. This year, my merry band of Demanders—Jana, Jim, Steven Boone, and yours truly—landed it. Next year, Roger will make us arm wrestle for it. Crank up those DVD’s of Sly Stallone’s Over the Top, Far Flung Correspondents, and we’ll meet you halfway across the sky in 2013.

One thing everybody needs at a film festival is a festival buddy, someone with whom you can roam around and/or get into mischief. It’s great if you’ve brought your own, but it can be even better if you manage to find and befriend one while onsite. This year, I managed to do the latter and, lo and behold, it was one of those pesky FFC’s. Though familiar with his writing, I’d never met Michał Oleszczyk before EbertFest. His tie to the Demanders came courtesy of fellow Demander Kevin B. Lee (whom I refer to by his full name at ALL times). We spoke briefly at the Presidential Gala and at the Meet and Greet, but it wasn’t until we played hooky from an EbertFest screening (a tradition for me, bad influence that is I) in favor of Blue Moons and burgers that we discovered we had much in common despite being from different corners of the world, he from Poland and I from the Garden State. Such is the beauty of this festival. Michał's majestic piece on EbertFest is here, and like what you are reading now, evokes the personality of its writer. By festival’s end, I realized that, if I were Bogie in Casablanca, Rick Blaine had just found his Captain Louis. 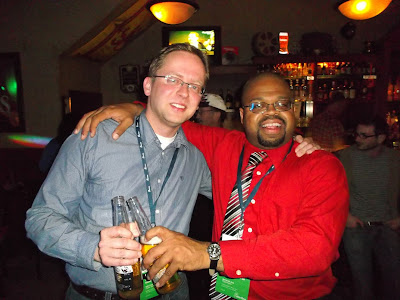 "Louis, I think this is the beginning of a beautiful friendship."

Time to bring some Joisey attitude to Champaign-Urbana.

New Jersey is a bipolar state. On one hand, my birthplace is responsible for Meryl Streep, Jack Nicholson and Springsteen. On the other, it’s to blame for Snooki, “Nork” Airport and the thing that single-handedly destroyed the ozone layer, Jersey Hair. Nothing provides more evidence of the state’s warped duality than sports. Sandwiched between New York City and Philadelphia, New Jersey residents root for one city’s teams or the other with Civil War style intensity. For our great state has a Mason-Dixon line called Interstate 195, which cuts a craggly swath across New Jersey’s waistline. North of that line is Yankees-Mets-Jints-Jets-Rangers-Devils territory; south of it is Philly Nation, home of the Eagles, Phillies and Flyers. ‘Tis only appropriate that 195, or Exit 7A on the Noo Joisey Toinpike for our “What Exit?” fans out there, takes you to Great Adventure, an amusement park with a drive through safari from which animals occasionally escape. Once, a colleague of mine from my AT&T days opened his door to find a misplaced lion sitting on his porch. It was eating his Giants jersey, which he’d left hanging outside to dry.

That lion was from the south side of Interstate 195. 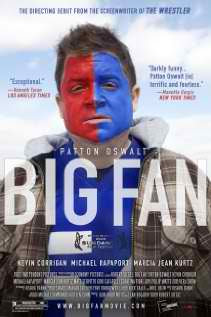 Though based in Staten Island, Robert Siegel’s “Big Fan” understands the rivalry between New York and Philly fans. The opening feature on EbertFest’s second day stars Patton Oswalt as Paul, a rabid Jints fan so devoted to the former team of The Tuna that he scripts long, rambling monologues to spout on sports radio at 2 AM. His intensity is met by the voice of Michael Rapaport as Phil, an equally rabid Philadelphia Eagles fan.  Both men are well beyond obnoxious sports fans, but “Big Fan” refuses to pass judgment nor does it allow Paul to solicit pity from the viewer—even after a Big Blue player beats Paul black and blue. He’s happy in his dead-end job, living at home with his increasingly pissed off mother and tailgating in the parking lot of the old Giants Stadium while listening to the game. He can’t see it live because, unless you’re a season ticket holder or Jimmy Hoffa, you’re not seeing the inside of a sold out Giants game until 2020.

According to the Q&A with Siegel, Patton Oswalt is no fan of football. This makes his performance all the more astounding. Not only does he successfully channel rage, disappointment and suspenseful slow burning, he nails the standard issue, crazy ass Giants fan. And I should know. I live 3 miles from Met Life Stadium. I grew up in a house full of Jints fans—all three of my brothers and my Pops worshipped Wellington Mara’s team. I spent lots of evenings sleeping on the couch during football season in the 90’s because I was married to a Giants fan. My heart belongs to the San Francisco 49ers. It’s a lonely existence living along the Hudson River.

After the film, I overheard some audience members tsk-tsking Paul and his passion. I wanted to scold these cinephiles for their hypocrisy. “Look inside yourselves, sinners,” I wanted to preach, “and find that slavish devotion you have to some filmmaker, some actor, some screenwriter. Thou can’t cast the first stone!” I’ve seen bigger arguments over movies than any other subject besides God. Hell, I once saw a guy get punched in the face at the New York Film Festival for loving Rohmer more than Godard. Knocked the fuck out over dry as hell Eric Rohmer! Fanaticism isn’t just for sports lovers, folks

Thursday night is Karaoke Night at EbertFest, and, for my second year in a row, I attended the shindig thrown together by FFC Olivia Collette and her energetic, delightfully humorous husband, Russell. The bar was lively, with people dancing, drinking and singing their hearts out. Olivia did a rocking version of 99 Luftbalons and, fresh from our screening of “Terri,” the delightful and surprisingly frank teenage drama about a kid more comfortable in his own skin than those who judge him, was Terri himself, Jacob Wysocki. “Hey, Cee-Lo!” said Jacob’s best buds. “Fuck you!” said I. Terri and his pirates' karaoke performance almost made me like the Backstreet Boys.

“I guess I’m going to have to sing a Cee-Lo song,” I told Raymond Lambert. “Let’s give the people what they want.” But Cee-Lo was nowhere to be found in the karaoke book. “Thank God,” I thought to myself. “Well, you have to sing something,” said Raymond, who was contemplating Al Green. “Let’s see if there’s any Prince,” I said. Scrolling down the book, I discovered “Let’s Go Crazy.” “You should do THAT,” said Raymond, pumping me up. So armed with some liquid courage courtesy of my new buddy Michał, I stepped to the mike and imagined I was purifying myself in the waters of Lake Minnetonka.

I sang my ass off, screaming and acting like His Purple Badness. Even so, "Let's Go Crazy" was still easier to sing than my supposed doppelganger’s song about crazy. I was photographed by FFC Pablo Villaça, who had a great camera and a greater eye.

I must have made an impression because, upon running into the "Terri Crew" at the Union, one of the guys yelled out “Prince!” Had I shaken the Cee-Lo Green curse for good? Don’t bet on it.

Tomorrow: Spending Time With The Gay Dragonfly, The Truth About Odie and Blogs, and Causing Trouble With the Boone-inator
Posted by odienator at 9:16 PM