Tell Gobby All About It: Born To Be Bad

(This is part of the Nicholas Ray Blog-A-Thon over at Cinema Viewfinder.) 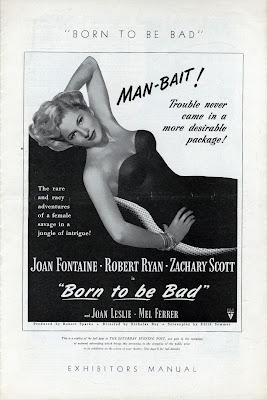 In 1950, cinematic women lost their damn minds. Eve Harrington longed for the spotlight, and was willing to wrestle it from Margo Channing by any means necessary. Norma Desmond longed for the spotlight too, and was willing to obtain it by shooting a gigolo in the back under the guise of “madness.” These characters are well known, classic dames of the cinema, but there’s another, lesser-known schemer vying for the Bad Girl title in 1950. Her name is Christabel Caine, and the adulation she seeks isn’t from the audience, it’s from Dead Presidents and the rich men who consort with them.  Like Salt and Pepa, Christabel will take your man while making you look like the villain in the process. Then she’ll attempt to divorce him and take half his shit. It doesn’t matter if you’re her innocent cousin or the man she really loves. She’ll toss you under the bus while lying and denying all the way to the bank. “Who me? What bus?” she’ll ask innocently.
Innocent is a trait normally played by Joan Fontaine, the actress who embodies the bad girl whose characteristics are described in the title of Nicholas Ray’s 1950 soap opera, Born to be Bad. Remember how you feared Cary Grant was poisoning Ms. Fontaine with that ominous glass of milk in Suspicion? After Born to Be Bad, you’ll not only root for Cary to be the killer, you’ll be spooning poison into her milk like it was Nestle Quik.  Christabel is unrepentant and irredeemable, and Fontaine relishes the change of pace. She and her director know this is 100% Grade-A soapy kitsch that requires its lead to go full-court bitch, plowing down all comers as she slam-dunks her way into the society pages. Christabel’s surname, Caine, made me think of another unrepentant soap diva, All My Children’s Erica Kane. Since I’ve loved watching my “stories” ever since I was a kid, I knew I’d get a kick out of Born to Be Bad.

Bad is a battle of good and bad Joans, Leslie and Fontaine, respectively. Leslie’s Donna is Christabel’s cousin. She’s engaged to a very wealthy Howard Hughes clone played by Zachary Scott. She is leaving her job after the wedding, and thinks Christabel would be a good fit as a replacement. Christabel purposely shows up a day early, pretending to be embarrassed by her faux pas. In reality, she knew Donna was attending a big socialite party that day, and her cousin would be way too nice not to invite her to tag along. Out of the kindness of her own heart and the stupidity of her own naivete, Donna allows her to stay. Her name may be Donna, but she’s more like another character on Sanford and Son, Lamont. She’s a big dummy for not kicking Christabel to the curb.

Christabel plans to kick Donna to the curb, though. While Donna is out at a bash, Christabel awakens to find cynical, abrasive writer Nick Bradley in the house. It’s a Meet Not-So-Cute, as Christabel is terrified and Bradley, in the guise of Robert Ryan, is suitably gruff and smart-mouthed. Ms. Caine’s loins are intrigued by Bradley, but her brain and her pocketbook remain fixated on Donna’s fiancée, Curtis. With Nick, she enters into what he would later call a “sex attraction,” biding her time before making her move on her sugar daddy.

Christabel’s racket is to feign innocence while underhandedly shaping the scenario to suit her. She uses her uncle and aunt’s influence to get closer to Curtis, then becomes Iago to his Othello. Instead of selling infidelity, Iago Caine peddles golddigger insurance. Curtis is worried that Donna is, to quote Biggie Smalls, trying to stick him for his paper. Instead of hollering “we want prenup, we want prenup!” like Kanye West, Curtis trusts his fiancée because, well, she’s trustworthy. Leave it to Ms. Caine to bring the snake to this Garden of Eden. Christabel becomes that bug in Curtis’ ear, whispering that he should conduct a “test” on Donna to gauge her intentions. Insecure Curtis falls for the bait, never once noticing that his soon-to-be cousin-in-law knows way too much about the ways of the greedy.

“Oh, Curtis, why?!!!” asked the woman in front of me at NYC’s famous (and allegedly pervert-ridden) Film Forum. Until the theater ran Born to Be Bad, I had no idea it existed. This after listening to Joan Leslie talk about her career at the Castro Theater’s Noir City Festival in 2009. (Aside: I covered that festival in 2010). Because Fontaine is so good at seeming to be innocent, that’s why, I wanted to tell my fellow audience member. We know better, and so does Nick Bradley. Ray is surprisingly, hilariously explicit in explaining the real reason Bradley is willing to put up with Christabel and her Christabelshit: Her pussy is da BOMB. Every time Bradley kisses her, Ryan grabs Fontaine and practically swings her around like a rag doll, slamming his face into hers with lip-bruising force. Even Curtis does it. Nobody kisses Donna like that, and when she exits Curtis’ life after being unfairly accused, nobody expects Curtis to start singing Ritchie Valens songs.

Only one other man sees through Christabel’s shenanigans, and Born to Be Bad wouldn’t be the classic it is without him. According to imDB, Mel Ferrer plays Gabriel Broome, but he calls himself Gobby. Gobby paints pictures of society dames, pictures that hang over the fireplaces of mansions throughout town. The pictures are over the fireplace, but Gobby’s personality is IN the fireplace: he’s flamingly gay and absolutely fabulous. I’ve read reviews that question this, but you don’t need to be Liza Minelli to see that Ferrer is clearly testing the censors with his portrayal of the BFF. “You don’t care very much for women, do you?” Christabel asks. Gobby replies “My dear girl, apart from painting my major occupation is convincing women that I'm harmless.” Ferrer’s delivery drips with sarcasm: These are some dumb ass, unobservant women!

Christabel also tries to outsmart Gobby, but he’s not having any of that. “This is Gobby,” he tells Christabel after catching her in a lie, and his reasons for painting her picture have little to do with artistry and everything to do with impending scandal. The price will go up if Christabel is successful, and Gobby’s gallery will be swarmed by a bunch of open wallets and purses.  It’s a tribute to Ray and his screenwriters that the uber-macho Nick Bradley and the anti-macho Gobby get the film’s best lines.  Ryan sinks his teeth into the hilarious macho dialogue: “How many times do I have to tell you how much you love me?” he asks Christabel. And Gobby’s one-line takedown of a society woman at a party is worth the price of renting Born to Be Bad.
Fontaine is excellent, and almost as much fun as Ferrer. After a particularly duplicitious move by Christabel, the woman in front of me yelled at the screen. "TWO FACED BITCH!!!' she exclaimed, much to the approval of the audience. That woman couldn't count. Christabel isn't two-faced. This bitch has EIGHT faces. Fontaine is a joy wearing all of 'em.
Fontaine may be good, but the film's best performance belongs to Joan Leslie. She has to be the beacon of virtue, the victimized, without being so damn boring we don't feel some guilt for loving Christabel's villany. Leslie gives a superb, nuanced turn that's more complex than the film warrants or deserves. My favorite Leslie movie is still The Hard Way (Ida Lupino--she scares the shit out of me!), but Born to be Bad is a fine runner up.
Despite coming out two months before All About Eve, Born to Be Bad shares some eerie similarities. with my favorite movie of all time. Gobby is Addison, Nick Bradley is macho like Bill Sampson and Christabel is obviously Eve. Also like my favorite movie of all time’s Eve and Addison, Gobby and Christabel get exactly what’s coming to them as a result of their unholy alliance. Gobby’s last scene shows that he, like Addison, benefited most from the bad girl’s evil plans. Now if only the filmmakers had spun off Gobby, making him a gossip columnist at odds with Hedda Hopper and Luella Parsons. Now that would have been fierce.

I'm late, but so what, dammit! Click here for the blog-a-thon.
Posted by odienator at 4:26 PM

Email ThisBlogThis!Share to TwitterShare to FacebookShare to Pinterest
Labels: Odies but Goodies