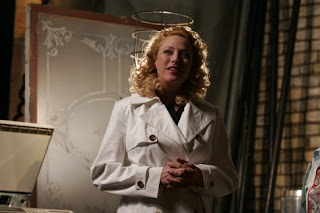 According to the imDB, Robert Altman's last movie, A Prairie Home Companion, opened five years ago today in some podunk town in Georgia. (The wide release date was some time in June.) Almost five years ago, I wrote a piece on the film for The House Next Door. It begins:

In Bob Fosse's All That Jazz (1979) and Robert Altman's A Prairie Home Companion (2006), the filmmakers respectively invoke death to gently chastise viewers for the imaginary crime of not affording them the appreciation they feel they deserve. Both works cry out, "You're gonna miss me when I'm gone." Yet for all their surface similarities, they are oceans apart in tone.

All That Jazz, one of my favorite movies, is meandering, infuriating and surreal, packed with dance numbers and music. Scripted by Robert Alan Aurthur, and owing Federico Fellini's 8 ½ a debt too large to repay, Fosse reimagines the musical drama of his own life, sometimes employing original cast members (Ann Reinking plays a character based on herself), while crafting a self-congratulatory piece that screams "I am Bob Fosse! I am breathing down the Grim Reaper's neck because I'm a drug-addicted workaholic! Partake in my world of cynical Broadway smut, and celebrate me before it's too late!" Prairie is also meandering, infuriating, surreal and full of music. Owing All That Jazz a similarly huge debt, Altman builds a dramatic frame around a facsimile of Keillor's long-running radio program and some of its recurring castmembers and characters, while crafting a self-congratulatory piece that declares, "I am Robert Altman! The Grim Reaper is breathing down my neck! Partake in my world of cynical Midwestern sing-a-longs and celebrate me before it's too late!"

Turns out Altman was right. The rest of the piece can be found here.
Posted by odienator at 12:00 AM