Art snobs and train crashes populated Saturday's matinee in Noir City, but before we answer the $64,000 question "Who is Brad Galt?", props must be given to our usual Master of Ceremonies, Mr. Eddie Muller. 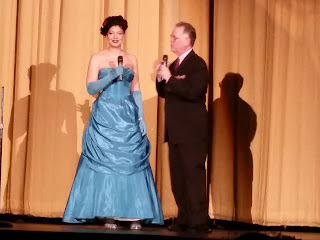 The Czar of Noir is seen here with Miss Noir City 2016, the lovely Aja De Coudreaux. If she looks familiar, it's because you've seen this:


Director Henry Hathaway started his career in Depression-era Hollywood and ended it in the deepest, darkest recesses of Blaxploitation. Somewhere in between, he helmed such classics as Kiss of Death, Niagara and True Grit. Hathaway was not known to have a sense of humor, and his lack of funny ha-ha made him the wrong person to direct Lucille Ball. Ricky Ricardo wasn't the only person trying to keep Lucy from performing for the public.

Stevens plays Brad Galt, a San Francisco private eye fresh off a 2-year stint in the pokey. He took the fall for others, which makes him extremely bitter and more than a little paranoid. Lucy is his faithful secretary, harboring the crush on her boss that is par for this course. But Lucy won't be had for a song or a cheap line (and believe me, Brad Galt tries and tries and tries). "I'm in it for the long haul," Lucy warns him. This includes putting herself in danger to help Galt clear his name.

Helping to soil Galt's name is Clifton Webb, he of Laura fame, here practically reprising his Waldo Lydecker role from that classic noir. The snobby Webb executes a ridiculously complicated plot to frame Galt for theft and murder, a plot that starts with the ostentatiously dressed William Bendix attempting to follow Galt around. "Who tails a guy while wearing a white suit?" asks Lucy. I can think of some possible suspects: Boss Hogg. Col. Sanders. Mr. Rourke from Fantasy Island. The list is endless.

Crazy plot mechanics aside, The Dark Corner is very self-aware of the trappings of its genre, sometimes to the point of parody. The lines are riper than usual, and the situations teeter perilously close to falling into Airplane territory. Great parodies also serve as credible examples of that which they are mocking, and The Dark Corner is a quite servicable noir. It's rather insane that Hathaway didn't appreciate the gifted comedienne he had at his disposal. Lucy is lots of fun here, and as in the other noirs she's done, she more than earns her apartment on the shady streets of Noir City.

The less you know about 1946's Crack-Up, the better. It's not very good, to be honest, but it does have some intriguing mysteries you should unravel without any hints from me. Art snob George Steele (Pat O'Brien) goes batshit one night and attempts to wreck the museum that employs him. He swears that he was in a train accident beforehand, which led to his irrational actions. The cops counter that, saying that the drunken Steele was lit up like the New York City night sky during the Fourth of July fireworks. Now fired, Steele must try to figure out why he survived that trainwreck before a far worse fate befalls him. Assisting him is Terry (Claire Trevor), a reporter whose wardrobe is well above her pay grade. Also on tap is Herbert Marshall, who deserves that heart attack Bette Davis didn't save him from in The Little Foxes.

Both films at this matinee really stick it to those who think art can only be found in hoity-toity high class, abstract and nonsensical works that have zero entertainment value whatsoever. That's what is supposed to make art "aaaaaht" (as the cognoscenti pronounce it). But we know better here in Noir City. Sometimes the finest art is in the lower places, where these fools never dare to look. It's their loss and our gain.

Next up: A pair of dark, dark, dark, DARK international noirs. Did I mention these moves are DARK?!!
Posted by odienator at 2:53 PM